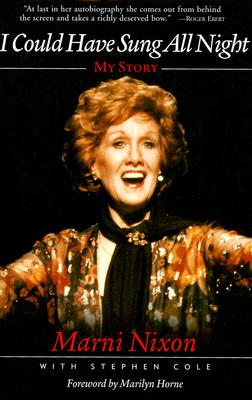 I Could Have Sung All Night

The most celebrated "voice" in Hollywood speaks for herself

Everyone knows Marni Nixon...even if they think they don't. One of the best-known and best-loved singing voices in the world, Nixon dubbed songs for Natalie Wood in "West Side Story," Audrey Hepburn in "My Fair Lady," and Deborah Kerr in "The King and I." She was the voice of Hollywood's leading ladies, arriving in filmland after a debut with the Los Angeles Philharmonic at 17 and continuing her career with Leonard Bernstein, Aaron Copland, Charles Ives, Stephen Sondheim, Rogers and Hammerstein, and many others. Her inspiring autobiography reveals Nixon as a singer, an actress, and a woman fighting for artistic recognition. Today, a survivor of breast cancer, she works on Broadway and television's "Law & Order SVU," tours with her own stage show, and teaches master classes in voice. I Could Have Sung All Night reveals the woman behind the screen in a frank, funny biography that is as remarkable as the woman whose story it tells.

Marni Nixon is renowned as the singing voice of many of Hollywood's greatest stars. On stage, she has starred in "Cabaret, My Fair Lady, Opal, Taking My Turn," and James Joyce's "The Dead." The winner of four Emmy awards for the children's program "Boomerang" and the star of her own one-woman show (also called "Marni Nixon: The Voice of Hollywood"), she lives in New York City.

Stephen Cole wrote "That Book About That Girl," a companion to the Marlo Thomas television series. As a librettist and lyricist, his musicals include "The Night of the Hunter, After the Fair, Dodsworth," and many others. He lives in New York City.
Loading...
or
Not Currently Available for Direct Purchase