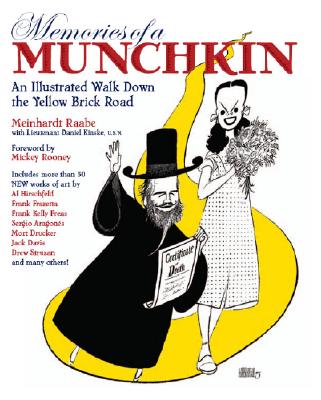 Memories of a Munchkin (Hardcover)

An Illustrated Walk Down the Yellow Brick Road

In this deluxe, lavish hardcover edition, one of the last surviving cast members of The Wizard of Oz reveals his life story and shares his memories of making that beloved Hollywood classic. Features more than 50 specially commissioned illustrations by renowned artists such as Al Hirschfeld, Jack Davis, Mort Drucker, Sergio Aragones, Greg Hildebrandt, Al Jaffee, and many others.

In this deluxe, lavishly illustrated, hardcover edition, one of the last surviving cast members ofThe Wizard of Oz reveals his life story and shares his memories of making that beloved Hollywood classic.

Born into a family of German dairy farmers, Meinhardt Raabe grew up in Farmington, Wisconsin. In 1934, before starting college, he heard about a special "Midget Village" exhibit at the World's Fair in Chicago. Raabe was hired to participate in that event, followed by years of appearing at other fairs and exhibitions. In 1938, he heard a rumor that MGM was going to make a movie with Judy Garland and "they wanted as many little people as they could find." Through an agent, Raabe was cast in the film. And what follows is his own account of life as a Munchkin on the set of The Wizard of Oz : enduring tough auditions, watching as the glorious Munchkinland set was built, putting up with long days of rehearsal, being costumed by legendary MGM designer Adrian, hob-nobbing on the set with the stars, witnessing various mishaps during filming, being visited on the set by curious Hollywood royalty such as Spencer Tracy and Clark Gable, and much more.

Here, too, is Raabe's life after the The Wizard of Oz : His career as an accomplished pilot with the Civil Air Patrol during World War II; more than 30 years as "Little Oscar," spokesman for the Oscar Mayer Company; his charity work and his role as advocate and kindred spirit to Little People everywhere. This is a charming, humorous and inspiring memoir that no The Wizard of Oz fan will want to miss.