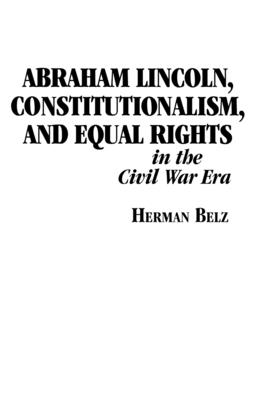 When the American people went to war in 1861, the task and the duty of maintaining the foundation principles of the republican experiment were in jeopardy. The question of if, and how, these principles should be preserved was of pressing importance. The outcome of the war could require the republican government to be transformed in order to strengthen the union or, conversely, if the war created the revolutionary situation that at times seemed pending, new principles for the resulting new nation would have to be formed as it emerged from the destruction and dislocation of the war. These were the issues to bear on the Constitution during the Civil War. These were the dilemas facing President Lincoln. This book, by one of the nation's leading constitutional historians, analyzes the nature and tendency of American Constitutionalism during the nation's greatest political crisis. In a series of related essays, Herman Belz combines detailed narrative with probing judicial analysis of the political thought of Abraham Lincoln, his exercise of executive power, and the application of the equality principle which would become a central issue during Reconstruction. Belz's essays are interdisciplinary in their approach, combining history, political science, and jurisprudence to study the political and constitutional climate and the changes which occurred under Lincoln during and after the war. Belz studies Lincoln as the focus of both contemporary political controversy and subsequent historical debate over the conservative or revolutionary character of Civil War Constitutionalism. He explores the politically controversial nature of the equality principle that lay at the heart of the slavery struggle and its resolution in wartime emancipation.

Herman Belz is Professor of History at The University of Maryland at College Park and is a leading expert on the constitution and politics in the Civil War Era.
or
Buy Here
Copyright © 2020 American Booksellers Association