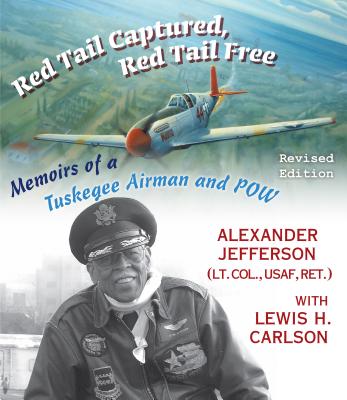 Memoirs of a Tuskegee Airman and POW

This book is a rare and important gift. One of the few memoirs of combat in World War II by a distinguished African-American flier, it is also perhaps the only account of the African-American experience in a German prison camp.

Alexander Jefferson was one of 32 Tuskegee Airmen from the 332nd Fighter Group to be shot down defending a country that considered them to be second-class citizens. A Detroit native, Jefferson enlisted in 1942, trained at Tuskegee Institute, Alabama, became a second lieutenant in 1943, and joined one of the most
decorated fighting units in the War, flying P51s with their legendary--and feared --"red tails."

Based in Italy, Jefferson flew bomber escort missions over southern Europe before being shot down in France in 1944. Captured, he spent the balance of the war in Luftwaffe prison camps in Sagan and Moosberg, Germany.

In this vividly detailed, deeply personal book, Jefferson writes as a genuine American hero and patriot. It's an unvarnished look at life behind barbed wire-- and what it meant to be an African-American pilot in enemy hands. It's also a look at race and democracy in America through the eyes of a patriot who fought to
protect the promise of freedom.

The book features the sketches, drawings, and other illustrations Jefferson created during his nine months as a "kriegie" (POW) and Lewis Carlson's authoritative background to the man, his unit, and the fight Alexander Jefferson fought so well.

Lt. Col. Alexander Jefferson, (USAF, Ret.) has degrees from Clark College and Wayne State University. He won numerous citations and remains active in Veterans' and Tuskegee Airmen organizations. He served in Michigan public schools for thirty years as a teacher and administrator, and lives in outside Detroit in Southfield. LEWIS H.CARLSON is co-author of Life behindBarbed Wire: The World War II Photographs ofPrisoner of War Angelo M. Spinelli (Fordham).
Loading...
or
Not Currently Available for Direct Purchase