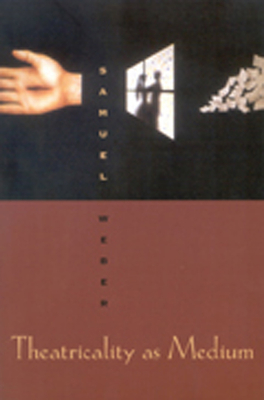 Ever since Aristotle's Poetics, both the theory and the practice of theater have been governed by the assumption that it is a form of representation dominated by what Aristotle calls the mythos, or the plot. This conception of theater has subordinated characteristics related to the theatrical medium, such as the process and place of staging, to the demands of a unified narrative.

This readable, thought-provoking, and multidisciplinary study explores theatrical writings that question this aesthetical-generic conception and seek instead to work with the medium of theatricality itself. Beginning with Plato, Samuel Weber tracks the uneasy relationships among theater, ethics, and philosophy through Aristotle, the major Greek tragedians, Shakespeare, Kierkegaard, Kafka, Freud, Benjamin, Artaud, and many others who develop alternatives to dominant narrative-aesthetic assumptions about the theatrical medium. His readings also interrogate the relation of theatricality to the introduction of
electronic media. The result is to show that, far from breaking with the characteristics of live staged performance, the new media intensify ambivalences about place and identity already at work in theater since the Greeks. Praise for Samuel Weber: "What kind of questioning is primarily after something other than an answer that can be measured . . . in cognitive terms? Those interested in the links between modern philosophy nd media culture will be impressed by the unusual intellectual clarity and depth with which Weber formulates the . . . questions that constiture the true challenge to cultural studies today. . . . one of our most important cultural critics and thinkers"--MLN

Samuel Weber is Avalon Professor of Comparative Literature at Northwestern University and Director of Northwestern's Paris Program in Critical Theory. He is the author of numerous books, including The Legend of Freud, Institution and Interpretation, Mass Medianras: Form, Technics, Media, Theatricality as Medium, and Targets of Opportunity: On the Militarization of Thinking. (Fordham)
Loading...
or support indie stores by buying on