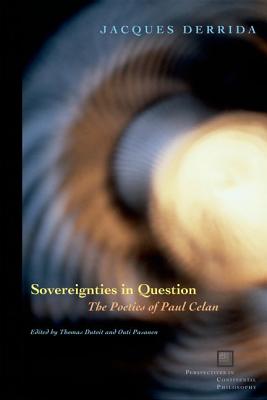 The Poetics of Paul Celan (Perspectives in Continental Philosophy)

Contents
- Shibboleth: For Paul Celan
- "A Self-Unsealing Poetic Text" Poetics and Politics of Witnessing
- Language Does Not Belong: An Interview
- The Majesty of the Present: Reading Celan's "The Meridian"
- Rams: Uninterrupted Dialogue--between Two Infinities, the Poem

This book brings together five powerful encounters. Themes central to all of
Derrida's writings thread the intense confrontation between the most famous
philosopher of our time and the Jewish poet writing in German who, perhaps
more powerfully than any other, has testified to the European experience of
the twentieth century. They include the date or signature and its singularity; the notion of the trace;
temporal structures of futurity and the "to come"; the multiplicity of language
and questions of translation; such speech acts as testimony and promising, but
also lying and perjury; the possibility of the impossible; and, above all, the question
of the poem as addressed and destined beyond knowledge, seeking to speak to
and for the irreducibly other. The memory of encounters with thinkers who have also engaged Celan's work
animates these writings, which include a brilliant dialogue between two
interpretative modes--hermeneutics and deconstruction. Derrida's approach to
a poem is a revelation on many levels, from the most concrete ways of reading
--for example, his analysis of a sequence of personal pronouns--to the most
sweeping imperatives of human existence (and Derrida's writings are always
a study in the imbrication of such levels). Above all, he voices the call to
responsibility in the ultimate line of Celan's poem: "The world is gone,
I must carry you," which sounds throughout the book's final essay like a refrain. Only two of the texts in this volume do not appear here in English for the first time. Of these, Schibboleth has been entirely retranslated and has been set following Derrida's own instructions for publication in French; A Self-Unsealing Poetic Text was substantially rewritten by Derrida himself and basically appears here as the translation of a new text. Jacques Derrida's most recent books in English translation include Counterpath: Traveling with Jacques Derrida (with Catherine Malabou). He died in Paris on October 8, 2004. Thomas Dutoit teaches at the Universit de Paris 7. He translated Aporias and edited On the Name, both by Jacques Derrida.

The late JACQUES DERRIDA was the single most influential voice in European philosophy of the last quarter of the twentieth century. His The Animal That Therefore I Am, Sovereignties in Question, and Deconstruction in a Nutshell have been published by Fordham University Press. Thomas Dutoit teaches at the Universite de Paris 7. He has translated Aporias and edited On the Name, both by Jacques Derrida. OUTI PASANEN has translated Jacques Derrida's work into Finnish.
Loading...
or support indie stores by buying on