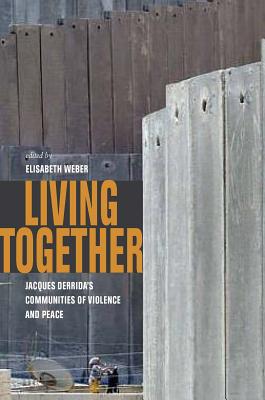 For Jacques Derrida, the notions and experiences of "community," "living," and "together" never ceased to harbor radical, in fact infinite interrogations. The often anguished question of how to "live together" moved Derrida throughout his oeuvre, animating his sustained reflections on hospitality, friendship, responsibility, justice, forgiveness, and mourning, as well as his interventions as an outspoken critic of South Africa's apartheid, the Israel/Palestine conflict, the bloody civil war in his native Algeria, human rights abuses, French immigration laws, the death penalty, and the "war on terror." "Live together," Derrida wrote, "one must . . . one cannot not 'live together, ' even if one does not know how or with whom."

In this volume, the paradoxes, impossibilities, and singular chances that haunt the necessity of "living together"are evoked in Derrida's essay "Avowing--The Impossible: 'Returns, ' Repentance, and Reconciliation," around which the collection is gathered. Written by scholars in literary criticism, philosophy, legal studies, religious studies, Middle Eastern studies, and sociology working in North America, Europe, and the Middle East, the essays in this volume tackle issues such as the responsibilities and fragility of democracy; the pitfalls of decreed reconciliation; the re-legitimization of torture in the "war on terror"; the connections between Orientalism, Semitism, and anti-Semitism; the delocalizing dynamics of globalization; crimes against humanity; nationalism; and politics as the art not of the possible but of the impossible.

The volume includes analyses of current controversies and struggles. Here, Derrida is here read in and with regard to areas of intense political conflict--in particular, those that oppose Israelis and Palestinians, Hindus and Muslims, victims and perpetrators of South African apartheid, Turks and Armenians.

The necessity of an infinitely patient reflection goes hand in hand with the obligation of justice as that which must not wait. It is in the spirit of such urgency, of a responsibility that cannot be postponed, that the essays in this volume engage with Derrida's thinking on "living together."

Elisabeth Weber is Professor of German and Comparative Literature at the University of California, Santa Barbara. She is the author of numerous texts on contemporary French thought and the co-editor, with Julie A. Carlson, of Speaking about Torture (Fordham).
or
Not Currently Available for Direct Purchase
Copyright © 2020 American Booksellers Association