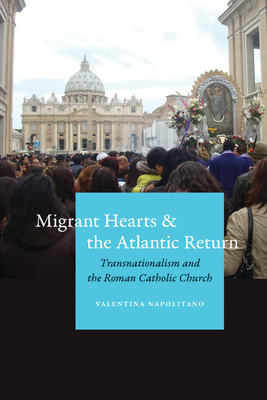 Migrant Hearts and the Atlantic Return

Transnationalism and the Roman Catholic Church

Migrant Hearts and the Atlantic Return examines contemporary migration in the context of a Roman Catholic Church eager to both comprehend and act upon the movements of peoples. Combining extensive fieldwork with lay and religious Latin American migrants in Rome and analysis of the Catholic Church's historical desires and anxieties around conversion since the period of colonization, Napolitano sketches the dynamics of a return to a faith's putative center. Against a Eurocentric notion of Catholic identity, Napolitano shows how the Americas reorient Europe.

Napolitano examines both popular and institutional Catholicism in the celebrations of the Virgin of Guadalupe and El Senor de los Milagros, papal encyclicals, the Latin American Catholic Mission, and the order of the Legionaries of Christ. Tracing the affective contours of documented and undocumented immigrants' experiences and the Church's multiple postures toward transnational migration, she shows how different ways of being Catholic inform constructions of gender, labor, and sexuality whose fault lines intersect across contemporary Europe.

Valentina Napolitano is Associate Professor of Anthropology at the University of Toronto. She is the author of Migration, Mujercitas, and Medicine Men: Living in Urban Mexico (California).
Loading...
or support indie stores by buying on