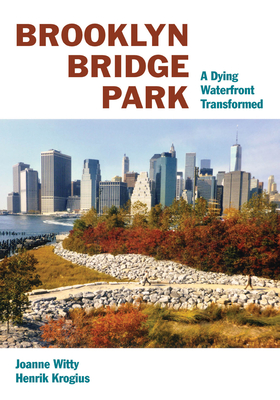 A major social and political phenomenon of how a community overcame overwhelming opposition and obstacles to build the Brooklyn Bridge Park.

Stretching along a waterfront that faces one of the world's greatest harbors and storied skylines, Brooklyn Bridge Park is among the largest and most significant public projects to be built in New York in a generation. It has transformed a decrepit industrial waterfront into a new public use that is both a reflection and an engine of
Brooklyn's resurgence in the twenty-first century. Brooklyn Bridge Park unravels the many obstacles faced during the development of the park and suggests solutions that can be applied to important economic and planning issues around the world.

Situated below the quiet precincts of Brooklyn Heights, a strip of moribund structures that formerly served bustling port activity became the site of a prolonged battle. The Port Authority of New York and New Jersey eyed it as an ideal location for high-rise or commercial development. The idea to build Brooklyn Bridge Park came from local residents and neighborhood leaders looking for less intensive uses of the property. Together, elected officials joined with members of the communities to produce a practical plan, skillfully won a commitment of government funds in a time of fiscal austerity, then persevered through long periods of inaction, abrupt changes of government, two recessions, numerous controversies often accompanied by litigation, and a superstorm.

Brooklyn Bridge Park is the success story of a grassroots movement and community planning that united around a common vision. Drawing on the authors' personal experiences--one as a reporter, the other as a park leader--Brooklyn Bridge Park weaves together contemporaneous reports of events that provide a record
of every twist and turn in the story. Interviews with more than sixty people reveal the human dynamics that unfolded in the course of building the park, including attitudes and opinions that arose about class, race, gentrification, commercialization, development, and government.

Despite the park's broad and growing appeal, its creation was lengthy, messy, and often contentious. Brooklyn Bridge Park suggests ways other civic groups can address such hurdles within their own communities.

Henrik Krogius (Author) Henrik Krogius (deceased) was a writer and producer for news programs at NBC and the editor of the Brooklyn Heights Press and Cobble Hill News, where he closely followed the Brooklyn Bridge Park project from its inception. Joanne Witty (Author) Joanne Witty is a lawyer and an environmentalist, and has served in both city and state government. Since 1998, she has been a park leader as president of the Local Development Corporation that created the park's master plan and vice chair of the Brooklyn Bridge Park Corporation that is building and operating the park.
or
Buy Here
Copyright © 2020 American Booksellers Association