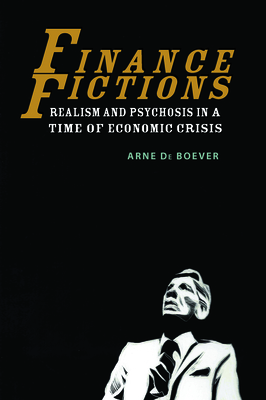 Realism and Psychosis in a Time of Economic Crisis

Finance Fictions takes the measure of what it means to live in a world ruled by high finance by examining the tension between psychosis and realism that plays out in the contemporary finance novel. When the things traded at the center of the economy cease to be things at all, but highly abstracted speculations, how do we come to see the real? What sorts of narrative can accurately approach the actual workings of a neoliberal economy marked by accelerating cycles of market crashes, economic and political crisis, and austerity?

Revisiting such twentieth-century classics of the genre as Tom Wolfe's Bonfire of the Vanities and Bret Easton Ellis's American Psycho, De Boever argues that the twenty-first century is witnessing the birth of a new kind of realistic novel that can make sense of complex financial instruments like collateralized debt obligations, credit default swaps, and digital algorithms operating at speeds faster than what human beings or computers can record. If in 1989 Wolfe could still urge novelists to work harder to "tame the billion-footed beast of reality," today's economic reality confronts us with a difference that is qualitative rather than quantitative: a new financial ontology requiring new modes of thinking and writing.

Mobilizing the philosophical thought of Quentin Meillassoux in the close reading of finance novels by Robert Harris, Michel Houellebecq, Ben Lerner and less well-known works of conceptual writing such as Mathew Timmons' Credit, Finance Fictions argues that realism is in for a speculative update if it wants to take on the contemporary economy--an "if" whose implications turn out to be deeply political. Part literary study and part philosophical inquiry, Finance Fictions seeks to contribute to a new mindset for creative and critical work on finance in the twenty-first century.

Arne De Boever is Faculty in the School of Critical Studies and Director of the Aesthetics and Politics program at the California Institute of the Arts. He is the author of States of Exception in the Contemporary Novel (2012), Narrative Care (2013), and Plastic Sovereignties (2016).
or
Buy Here
Copyright © 2020 American Booksellers Association