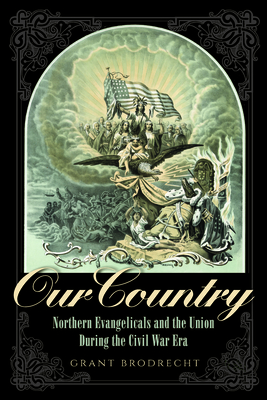 On March 4, 1865, the day Abraham Lincoln delivered his second inaugural address, Reverend Doctor George Peck put the finishing touches on a collection of his sermons that he intended to send to the president. Although the politically moderate Peck had long opposed slavery, he, along with many other northern evangelicals, was not an abolitionist. During the Civil War he had come to support emancipation, but, like Lincoln, the conflict remained first and foremost about preserving the Union. Believing their devotion to the Union was an act of faithfulness to God first and the Founding Fathers second, Our Country explores how many northern white evangelical Protestants sacrificed racial justice on behalf of four million African-American slaves (and then ex-slaves) for the Union's persistence and continued flourishing as a Christian nation.

By examining Civil War-era Protestantism in terms of the Union, author Grant Brodrecht adds to the understanding of northern motivation and the eventual "failure" of Reconstruction to provide a secure basis for African American's equal place in society. Complementing recent scholarship that gives primacy to the Union, Our Country contends that non-radical Protestants consistently subordinated concern for racial justice for what they perceived to be the greater good. Mainstream evangelicals did not enter Reconstruction with the primary aim of achieving racial justice. Rather they expected to see the emergence of a speedily restored, prosperous, and culturally homogenous Union, a Union strengthened by God through the defeat of secession and the removal of slavery as secession's cause.

Brodrecht eloquently addresses this so-called "proprietary" regard for Christian America, considered within the context of crises surrounding the Union's existence and its nature from the Civil War to the 1880s. Including sources from major Protestant denominations, the book rests on a selection of sermons, denominational newspapers and journals, autobiographies, archival personal papers of several individuals, and the published and unpublished papers of Abraham Lincoln, Andrew Johnson, and Ulysses S. Grant. The author examines these sources as they address the period's evangelical sense of responsibility for America, while keyed to issues of national and presidential politics.