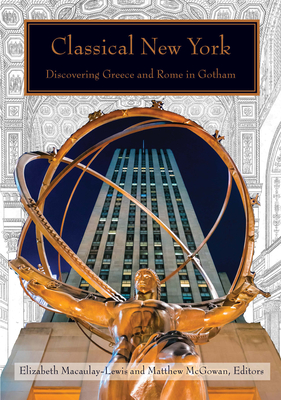 Discovering Greece and Rome in Gotham

During the rise of New York from the capital of an upstart nation to a global metropolis, the visual language of Greek and Roman antiquity played a formative role in the development of the city's art and architecture. This compilation of essays offers a survey of diverse reinterpretations of classical forms in some of New York's most iconic buildings, public monuments, and civic spaces.

Classical New York examines the influence of Greco-Roman thought and design from the Greek Revival of the late eighteenth and early nineteenth centuries through the late-nineteenth-century American Renaissance and Beaux Arts period and into the twentieth century's Art Deco. At every juncture, New Yorkers looked to the classical past for knowledge and inspiration in seeking out new ways to cultivate a civic identity, to design their buildings and monuments, and to structure their public and private spaces. Specialists from a range of disciplines--archaeology, architectural history, art history, classics, and history-- focus on how classical art and architecture are repurposed to help shape many of New York City's most evocative buildings and works of art. Federal Hall evoked the Parthenon as an architectural and democratic model; the Pantheon served as a model for the creation of Libraries at New York University and Columbia University; Pennsylvania Station derived its form from the Baths of Caracalla; and Atlas and Prometheus of Rockefeller Center recast ancient myths in a new light during the Great Depression. Designed to add breadth and depth to the exchange of ideas about the place and meaning of ancient Greece and Rome in our experience of New York City today, this examination of post-Revolutionary art, politics, and philosophy enriches the conversation about how we shape space--be it civic, religious, academic, theatrical, or domestic--and how we make use of that space and the objects in it.

Elizabeth Macaulay-Lewis (Edited By) Elizabeth Macaulay-Lewis is Associate Professor of Liberal Studies and Middle Eastern Studies. She is also the Executive Officer of the M.A. Program in Liberal Studies at the Graduate Center, the City University of New York. Matthew McGowan (Edited By) Matthew M. McGowan is Associate Professor and Chair of Classics at Fordham University.
or
Buy Here
Copyright © 2020 American Booksellers Association