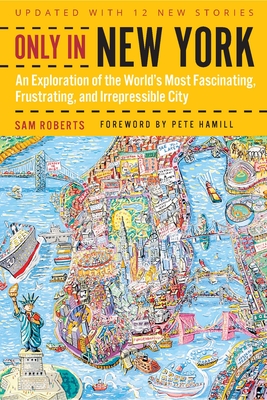 Only in New York

An Exploration of the World's Most Fascinating, Frustrating, and Irrepressible City

No one denies that New York City is unique--but what makes it sui generis? Sam Roberts, a longtime city reporter, has puzzled over this in print and in his popular New York Times podcasts for years. In Only in New York, updated with new tales and fascinating glimpses into uniquely NYC life, he writes about what makes this city tick and why things are the way they are in the greatest of all metropolises on earth. The more than 75 essays in this book cover a variety of topics, including:

-How do New Yorkers react during disasters?
-Maritime history (the Hudson River)
-Crowds, space, and population growth
-1908: a year in History history
-Jewish Daily Forward
-What happens when a neighborhood loses its tony ZIP code? A winning and informative gift book for every fan of "the city," Only in New York is elegantly written and solidly reported.

Sam Roberts (Author) Sam Roberts has written for the New York Times since 1983, where he has served as urban affairs correspondent since 2005. He is the author of numerous books on New York City, including Grand Central: How a Train Station Transformed America and A History of New York in 101 Objects. Pete Hamill (Foreword By) Pete Hamill, a Meyer Berger Award-winning journalist, is the author of many bestsellers, including A Drinking Life and Forever.
or support indie stores by buying on