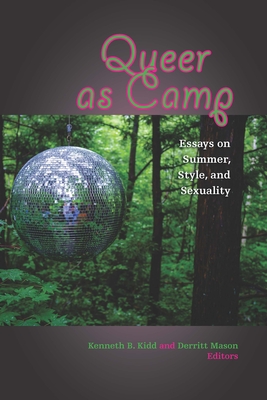 Essays on Summer, Style, and Sexuality

Named the #1 Bestselling Non-Fiction Title by the Calgary Herald

To camp means to occupy a place and/or time provisionally or under special circumstances. To camp can also mean to queer. And for many children and young adults, summer camp is a formative experience mixed with homosocial structure and homoerotic longing. In Queer as Camp, editors Kenneth B. Kidd and Derritt Mason curate a collection of essays and critical memoirs exploring the intersections of "queer" and "camp," focusing especially on camp as an alternative and potentially nonnormative place and/or time. Exploring questions of identity, desire, and social formation, Queer as Camp delves into the diverse and queer-enabling dimensions of particular camp/sites, from traditional iterations of camp to camp-like ventures, literary and filmic texts about camp across a range of genres (fantasy, horror, realistic fiction, graphic novels), as well as the notorious appropriation of Indigenous life and the consequences of "playing Indian." These accessible, engaging essays examine, variously, camp as a queer place and/or the experiences of queers at camp, including Vermont's Indian Brook, a single-sex girls' camp that has struggled with the inclusion of nonbinary and transgender campers and staff; the role of Jewish summer camp as a complicated site of sexuality, social bonding, and citizen-making as well as a potentially if not routinely queer-affirming place. They also attend to cinematic and literary representations of camp, such as the Eisner award-winning comic series Lumberjanes, which revitalizes and revises the century-old Girl Scout story; Disney's Paul Bunyan, a short film that plays up male homosociality and cross-species bonding while inviting queer identification in the process; Sleepaway Camp, a horror film that exposes and deconstructs anxieties about the gendered body; and Wes Anderson's critically acclaimed Moonrise Kingdom, which evokes dreams of escape, transformation, and other ways of being in the world. Highly interdisciplinary in scope, Queer as Camp reflects on camp and Camp with candor, insight, and often humor. Contributors: Kyle Eveleth, D. Gilson, Charlie Hailey, Ana M. Jimenez-Moreno, Kathryn R. Kent, Mark Lipton, Kerry Mallan, Chris McGee, Roderick McGillis, Tammy Mielke, Alexis Mitchell, Flavia Musinsky, Daniel Mallory Ortberg, Annebella Pollen, Andrew J. Trevarrow, Paul Venzo, Joshua Whitehead

Kenneth B. Kidd (Edited By) Kenneth B. Kidd is Professor of English at the University of Florida. He is the author of Making American Boys: Boyology and the Feral Tale and Freud in Oz: At the Intersections of Psychoanalysis and Children's Literature. Derritt Mason (Edited By) Derritt Mason is Assistant Professor of English at the University of Calgary.
or
Buy Here
Copyright © 2020 American Booksellers Association