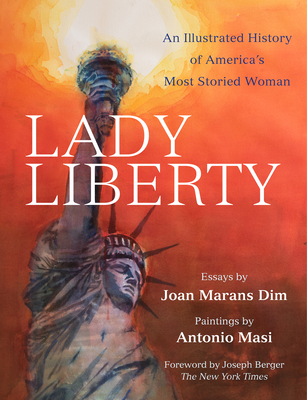 An Illustrated History of America's Most Storied Woman

Magnificent art complements an unvarnished history of the Statue of Liberty and its relationship to immigration policy in the United States throughout the years.

What began in 1865 in Glatigny, France, at a dinner party hosted by esteemed university professor douard Ren de Laboulaye and attended by, among others, a promising young sculptor, Fr d ric Auguste Bartholdi, was the extravagant notion of creating and giving a monumental statue to America that celebrated the young nation's ideals. Bartholdi, and later civil engineer Alexandre-Gustave Eiffel, caught the spirit of the project and thus began the epic struggle to create, build, transport, and pay for the monument. Although The Statue of Liberty was to be a gift from France, the cost of its creation was meant to be shared with America. To the Lady's creators and supporters, America offered liberty and the right to live one's life unencumbered--that is, without fear and with a rule of law and a government that derived its power from the consent of the people it governed. Yet, in America, fundraising for the Lady dragged. Had it not been for publisher Joseph Pulitzer's flashy fundraising campaign in his newspaper the World, the entire project likely would have collapsed.

The tale, abundant with lively and interesting stories about the Statue of Liberty's creators, is also told in the context of America's immigration policies--past and present. Explored, too, is the American immigrant experience and how it viscerally connects to the Lady. Also integral to the tale is poetry--a sonnet--written by a then-largely unknown Jewish poet, Emma Lazarus, who moved a nation and gave a deeply rich and fresh meaning and purpose to the statue.

In addition to the prose, Lady Liberty includes thirty-three elegant, full-page stirring paintings by celebrated artist Antonio Masi. Lady Liberty, a smart, timely, entertaining, and nonpartisan jewel of a book, is written for every American--young and old.

Lady Liberty also speaks to the millions who dream of one day becoming Americans.

Dim and Masi offer this book now because the Statue of Liberty, as a symbol of American beneficence, has never been more relevant . . . or more in jeopardy.