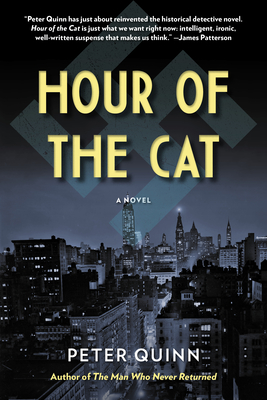 It's just another murder, one of the hundreds of simple homicides in 1939: A spinster nurse is killed in her apartment; a suspect is caught with the murder weapon and convicted. Fintan Dunne, the P.I. lured onto the case and coerced by conscience into unraveling the complex setup that has put an innocent man on Death Row, will soon find that this is a murder with tentacles which stretch far beyond the crime scene . . . to Nazi Germany, in fact; following it to the end leads him into a murder conspiracy of a scope that defies imagination. The same clouds are rolling over Berlin, where plans for a military coup are forming among a cadre of Wehrmacht officers. Admiral Wilhelm Canaris, head of the Military Intelligence, is gripped by a deadly paralysis: He is neither with the plotters nor against them. Joining them in treason would violate every value he holds as an officer. Betraying the plotters to the Gestapo Chief, Reinhard Heydrich, might just forsake the country's last hope to avert utter destruction and centuries of shame. Heydrich is suspicious. With no limits to Hitler's manic pursuit of territorial expansion, with crimes against the people candy-coated as racial purification, the "hour of the cat" looms when every German conscience must make a choice. When Canaris receives an order to assist in a sinister covert operation on foreign shores, his hour has come. Hour of the Cat is a stunning achievement: tautly suspenseful, hauntingly memorable, and brilliantly authentic.

Peter Quinn is a novelist, political historian, and foremost chronicler of New York City. He is the author of Looking for Jimmy: In Search of Irish America and a trilogy of historical detective novels.
Loading...
or support indie stores by buying on