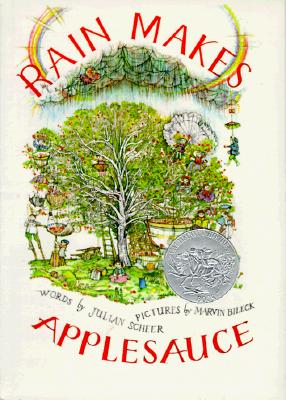 
This is a book of silly talk. It doesn't pretend to be anything else. And yet it is an extraordinary creation, in which author and artist speak to children in a very special way. The fanciful nonsense and marvelously intricate pictures are full of sly subtleties and happy surprises for both eye and ear.

It is a book of absurd delights, of tiny, fey graphic details, of captivating scenes and lyrical phrases that stretch the imagination. Children will return to it again and again for new meanings, new images, new responses.

Julian Scheer (1926–2001) was a native Virginian and a graduate of the University of North Carolina. He began his career as a journalist, and later became an administrator for NASA’s public affairs and a trustee for the Smithsonian Institution’s National Air and Space Museum. After the lunar landing, Scheer was awarded NASA’s highest recognition, the Distinguished Service Medal. He wrote two books for children and three books for adults.

Marvin Bileck (1920–2005) was born in New Jersey and graduated from Cooper Union before receiving a Fulbright Grant to study in France. His work has been exhibited in galleries and museums across the country, including the Metropolitan Museum of Art and the Chicago Institute of Art. He illustrated many books for children and received a Caldecott Honor for Rain Makes Applesauce.
Loading...
or
Not Currently Available for Direct Purchase