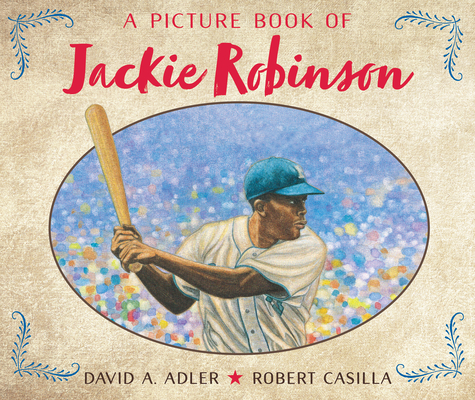 A moving, illustrated account of the first African American baseball player in the major leagues.

In April 1947, Jackie Robinson joined the Brooklyn Dodgers, and forever changed the history of sports. But it took more than talent for Jackie to reach the major leagues—his courage and determination helped him overcome unjust policies and racist backlash.

From his early life in Georgia through his 1955 World Series victory and beyond, this account of Robinson's life is an inspiring look at how one person can effect real change in the world.  Written in simple, narrative style and beautifully illustrated, this is a perfect introduction for young readers interested in baseball, history, and civil rights.

An authors note acknowledges some of the other pioneers in desegregating baseball, and a timeline of important dates is included.

Robert Casilla is the illustrator of several titles in David A. Adler's Picture Book Biography series, with subjects that include Martin Luther King, Jr., Rosa Parks, Eleanor Roosevelt, and Jesse Owens. He lives in Connecticut.
Loading...
or support indie stores by buying on