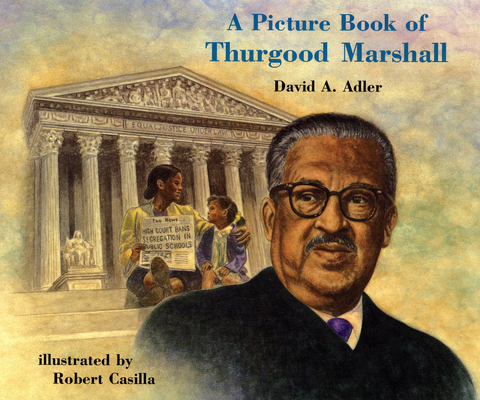 A brilliant lawyer, a leader of the Civil Rights movement, and the first African-American justice of the US Supreme Court.

A strong-willed boy, Marshall grew up in Baltimore, MD with the guidance of his parents who believed in the power of equality, education, and the importance of hard work.

His determination carried him through law school at Howard University where he graduated at the top of his class.

Marshall worked for the NAACP (National Association for ther Advancement of Colored People) and was the first African American to win a case before the United States Supreme Court. He argued thirty-two cases before the Supreme Court—winning twenty-nine. His greatest court victory was the case of Brown vs. Board of Education of Topeka—a turning point in the battle against segregation.

Ultimately, Marshall would be appointed as a justice on the Supreme Court. When he retired in 1991, he was called a true American hero and the most significant lawyer of his time.

"A simple, brief introduction to Marshall's life and to segregation in modern American history." --Booklist

Robert Casilla is the illustrator of several titles in David A. Adler's Picture Book Biography series, with subjects that include Martin Luther King, Jr., Rosa Parks, Eleanor Roosevelt, and Jesse Owens. He lives in Connecticut.
Loading...
or
Not Currently Available for Direct Purchase