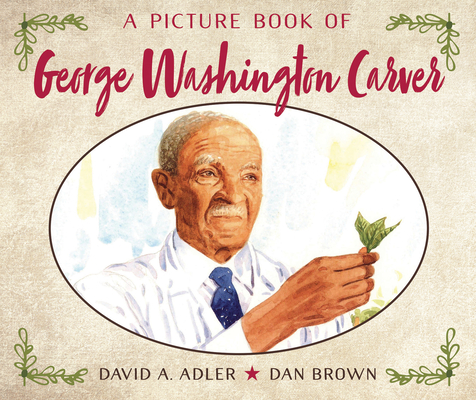 Born a slave, he became a leading scientist.

This is the inspiring story of the pioneering African-American teacher, scientist, and artist. Carver is perhaps best known for his scientific work with peanuts and sweet potatoes (and for inventing peanut butter!), but Time magazine also called him the "Black Leonardo" for his painting. Adler tells of Carver's work at the Tuskegee Institute with Booker T. Washington, his hard childhood, and his determination to learn despite many obstacles,

A man of deep faith, Carver worked throughout his life to create scientific discoveries that would improve the lives of Southerners--especially African Americans.

The colorful illustrations show Carver in all stages of his life and give children insight to Carver's world.

Dan Brown was born in Syracuse, New York. He studied painting and illustration at the Paier School of Art and currently does illustration for publishing companies and advertising agencies. He lives in New York City.
Loading...
or support indie stores by buying on