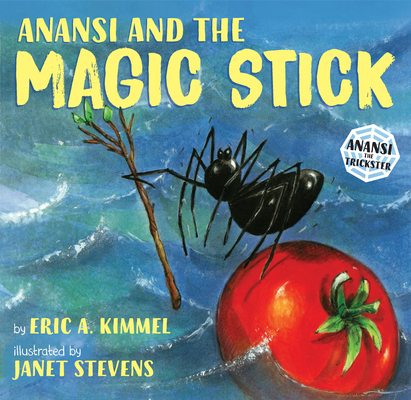 Anansi and the Magic Stick (Anansi the Trickster #4)

When the other animals laugh at his messy house, Anansi the Spider is embarrassed.  He wants to fix the problem . . . as long as he doesn't have to work too hard.

Stomping off in a huff, Anansi stumbles into an amazing secret—Hyena has a magic stick that follows his orders. If he steals it, the spider thinks, he'll have the neatest home in town and he'll never have to work again.

But the magic might be more than Anansi bargained for...

Based on tales originating in West Africa and familiar in Caribbean culture, the five-book Anansi the Trickster series is full of slapstick humor and mischief. Eric A. Kimmel’s imaginative retellings  combined with Janet Stevens’ expressive illustrations create the perfect silly stories for fun-loving kids.

Praise For Anansi and the Magic Stick (Anansi the Trickster #4)…

"... An enjoyable offering that is clever, funny, surprising, and traditional all at once."—School Library Journal

" The slapstick of the trickster out-tricked is a lot of fun, and preschoolers will want to join in the rhythmic chant, "Hocus pocus, Magic Stick…"—Booklist

Eric A. Kimmel, having loved traditional stories since he was a child, has written, retold, and adapted folktales and legends from around the world. Along with Anansi and the Magic Stick, Kimmel has written four other Anansi titles, including Anansi’s Party Time, which was awarded Bank Street College’s Best Children’s Book of the Year in 2008. Dr. Kimmel lives in Portland, Oregon with his wife Doris.

Janet Stevens has written and illustrated popular books for over 30 years. Some of her titles include Coyote Steals the Blanket: A Ute Tale and Tops & Bottoms. Her books include New York Times Bestsellers, Time Magazine Best Books of the Year, ALA Notable books, and a Caldecott Honor. She is most proud of her numerous state book awards that were voted on by young readers. She has two children and lives in Boulder, Colorado.
Loading...
or support indie stores by buying on
(This book is on backorder)