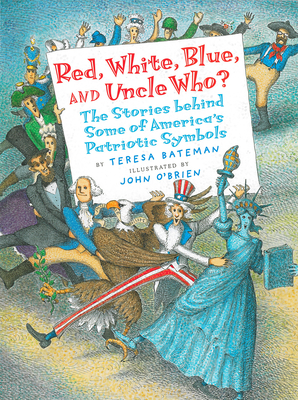 Red, White, Blue and Uncle Who?

The Stories Behind Some of America's Patriotic Symbols

Have you ever wondered how the Liberty Bell got cracked? Did you know the wild turkey almost became the national bird of the United States? And who is Uncle Sam, anyway?

Answer all these questions and many more as you explore the history behind seventeen well-known monuments and symbols of the United States of America—including the Great Seal, the Pledge of Allegience, the Capitol Building and more.

Descriptions of each symbol include the history behind it, the people involved in creating it, and intriguing trivia. Important dates are highlighted, helping to create a timeline of when these patriotic symbols became accepted parts of our nation's history.

John O'Brien's black-and-white cartoon illustrations on nearly every page add a touch of humor to the engaging text. An index is included.

Praise For Red, White, Blue and Uncle Who?: The Stories Behind Some of America's Patriotic Symbols…

"Bateman keeps interest high with well-written and easy to understand short chapters about each patriotic symbol. . . . O'Brien's humorous cartoon drawings add detail to the descriptions in the text, and are useful in helping the readers visualize the context of the symbol. . . . a must for elementary grades studying America's early years."—Kirkus Reviews

"This appealing book will be welcomed by report writers and browsers and will be a great addition to units on American history."—School Library Journal

"Bateman finds plenty of interesting information to share about each symbol or site, and browsers will be entertained by the many stories of origination, construction, and history."—Booklist

Teresa Bateman is a school librarian, a storyteller and the author of many lively stories and poems for children. She has won both the Storytelling World Award and the Anne Izard Storyteller's Award. Her books include Job Wanted and Keeper of Soles, an ALA Notable Children's Book. She lives in Tacoma, Washington.

John O'Brien is a cartoonist whose work appears in The New Yorker, The New York Times, The Washington Post, and other publications. He is the creator of many children's picture books and the illustrator of many more, including Washington D.C. from A-Z by Alan Schroeder.
Loading...
or
Not Currently Available for Direct Purchase