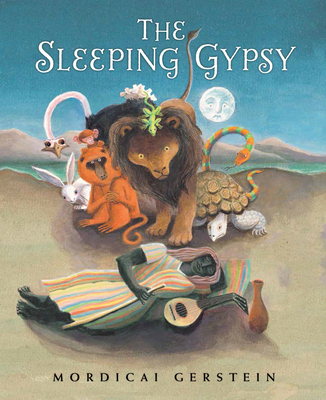 The characters in Henri Rousseau's The Sleeping Gypsy inspired Mordicai Gerstein to create an elegant, beautifully illustrated story about them.

A girl, alone in the desert, lies on the sand and sleeps. But she is not alone for long. A lizard, a rabbit, a turtle and other animals come to scrutinize her, and a lion leaps into the scene and claims her for his own.

A silhouette approaches from the distance. He introduces himself as Henri Rousseau, the dreamer of this dream, who plans to paint a picture of it. The animals pose for the artist but criticize his work with comments like "You've made my nose too big." So the artist removes complainers one by one from the painting, until only the girl and the lion remain.

Praise For The Sleeping Gypsy…

"Gerstein interprets Rousseau's painting style both faithfully and freely, and his story suggests that there's nothing inevitable about the famous works of art we think we know."—Publishers Weekly

"This is a splendid springboard for prediction and interpretation of the painting itself and for engaging children with other cryptic works that beg to have a backstory supplied."—The Bulletin of the Center for Children's Books

"In reproducing the artist's dream, Gerstein evokes the same surrealistic nature of the painting, but his pesky animals lighten the tone . . . this title offers children a story and information about an important Western artist and his work."—School Library Journal

Mordicai Gerstein is the author and illustrator of You Can't Have Too Many Friends!, The White Ram, A Book and The Man Who Walked Between the Towers, winner of the Caldecott Medal. He is also a painter, sculptor, designer and director of animated films.
Loading...
or
Not Currently Available for Direct Purchase