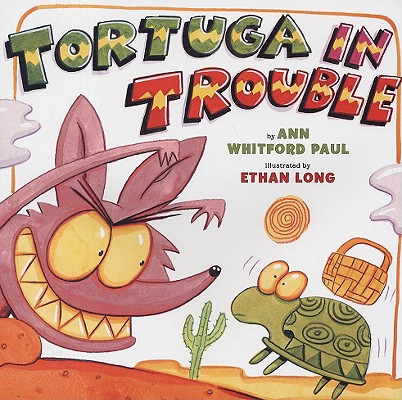 Yum! Tortuga is bringing a delicious supper to his abuela of ensalada, tamales, and flan. No wonder his amigos--Iguana, Conejo, and Culebra--are following him. But they aren't the only ones after the tortoise. Coyote has his own dinner plans for Tortuga and his grandmother. Can the three amigos warn them in time,in this variation of Little Red Riding Hood? A companion to "Manana, Iguana"; "Fiesta Fiasco"; and "Count on Culebra".

Ann Whitford Paul was a social worker before becoming a writer. Kirkus Reviews called her text for Mañana Iguana "clever" and said it is "an excellent chance for young readers ... to learn some Spanish vocabulary." Ann Whitford Paul writes poetry, picture books, and easy readers for children. Some of the picture books she wrote are "The Seasons Sewn: A Year in Patchwork," "All by Herself," and "Eight Hands Round: A Patchwork Alphabet." She lives in southern California.

Ethan Long created the animated cartoon Tasty Time with Ze Fronk. He is a Geisel Award winner and creator of The Croaky Pokey, the Wing Wing Brothers books and other hilarious works. He lives with his family in Florida.
Loading...
or
Not Currently Available for Direct Purchase