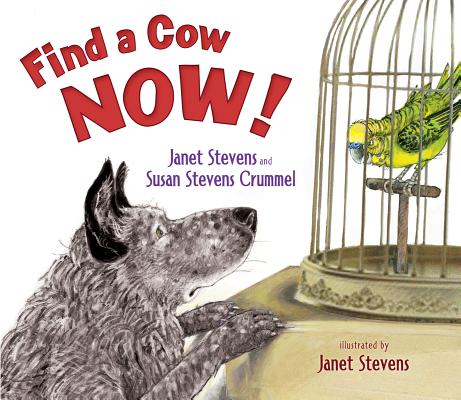 Ruff! Ruff! Yip! Yip! Dog is rounding up whatever he can find in his urban apartment, even chairs. He is also driving his bird companion crazy with the commotion. Bird sends him to the countryside to find something more appropriate to herd, such as a cow. but since Dog has never seen a cow, he finds all the wrong animals. After being pecked by a chicken, spattered with mud by a pig, and walloped by a donkey, Dog needs a friend. By chance a mysterious and kindly animal helps lead him back to the city, only to cause chaos there, before revealing her identity -- as a cow!

Janet Stevens's books have won many awards, including a Caldecott Honor. Her books have been named American Library Association Notable Books. She wrote this book with her sister, Susan, and created all the illustrations herself. She is the illustrator of the popular Anansi books written by Eric A. Kimmel. She lives in Boulder, Colorado.

Susan Stevens Crummel has written many best-selling picture books with her sister, Janet. These marvelous books have included a Time magazine's Top 10 Children's Book and winners of the Texas Bluebonnet Award and other state awards. She lives in Fort Worth, Texas.
Loading...
or
Not Currently Available for Direct Purchase