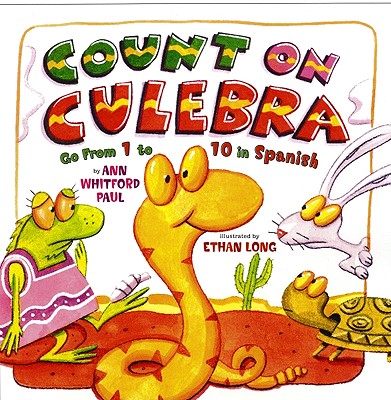 This companion to the popular Manana, Iguana teaches kids how to count in Spanish.

When Iguana stubs her toe, Doctor Culebra comes to the rescue. But his suggestions sound a little loco to everyone else. How will tying un rolling pin and dos kettles to Iguana's tail make her better? And more importantly, will Iguana feel well enough to make her cactus butter dulces?

Praise For Count on Culebra: Go From 1 to 10 in Spanish…

"The well-paced story exudes a charming silliness and invites participation. . . . The introduction of Spanish words and counting concepts along with the appealing art and offbeat story makes this a treat for classrooms and storytimes."—Booklist

"The bright cartoon illustrations are well suited to this hilarious tale that provides a practical lesson about life, as well as bilingual counting and vocabulary skills."—Kirkus Reviews

Ann Whitford Paul was a social worker before becoming a writer. Kirkus Reviews called her text for Mañana Iguana "clever" and said it is "an excellent chance for young readers ... to learn some Spanish vocabulary." Ann Whitford Paul writes poetry, picture books, and easy readers for children. Some of the picture books she wrote are "The Seasons Sewn: A Year in Patchwork," "All by Herself," and "Eight Hands Round: A Patchwork Alphabet." She lives in southern California.

Ethan Long created the animated cartoon Tasty Time with Ze Fronk. He is a Geisel Award winner and creator of The Croaky Pokey, the Wing Wing Brothers books and other hilarious works. He lives with his family in Florida.
Loading...
or support indie stores by buying on
(This book is on backorder)