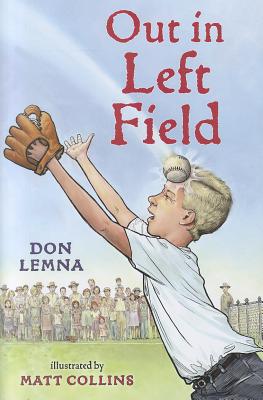 Out in Left Field

The sequel to When the Sergeant Came Marching Home offers more feel-good, laugh-aloud adventures of eleven-year-old Donald growin up in post-World War II Montana. This timeout, Donald is sure that his life is ruined when a pop fly beanball knocks him senseless out in left field. The error costs his team the game, and Donald is desperate to redeem himself. But all of his efforts end in disaster. Readers will welcome the return of this appealing young hero in a hilarious new story.

Don Lemna, raised on the American prairies, lives in Medicine Hat, Canada. When the Sergeant Came Marching Home was named a VOYA Top Shelf Fiction for Middle School Readers title. In a starred review, Booklist called it "timeless," and Kirkus Reviews said it was "full of heart and more than a few laugh-aloud moments."

Matt Collins has illustrated numerous picture books for children, including A Picture Book of Harry Houdini, which School Library Journal praised: "Deeply hued illustrations, heavy with red and black tones, are well suited to the subject." He lives in Connecticut.
Loading...
or
Not Currently Available for Direct Purchase