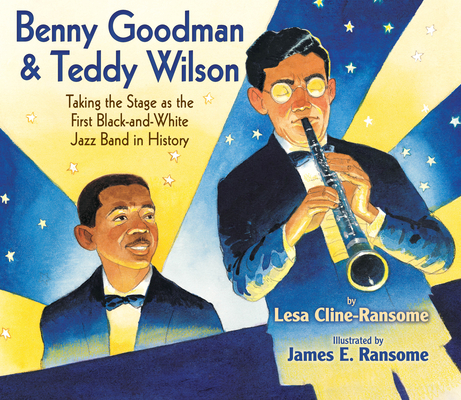 Teddy Wilson and Benny Goodman broke the color barrier in entertainment when they formed the Benny Goodman Trio with Gene Krupa. Here is the story of how two musical prodigies from very different backgrounds grew up, were brought together by the love of music, and helped to create the jazz style known as swing.

"The lyrical prose infuses the book with the spirit of jazz . . . the watercolors seem to blur together at times and swing like the music that Teddy and Benny play. The biographical back matter will give readers more insight into all of the musicians mentioned and shed light on how a love of music helped the two break down color lines."—School Library Journal

"Writing in punchy free verse that echoes the bounce of both men's music, Cline-Ransome traces Goodman and Wilson's parallel—but separate—paths to jazz fame . . . Working in watercolor outlined in loose pencil, Ransome strongly evokes the allure of music that Goodman and Wilson both felt as boys, as well as the way jazz all but demanded people get up and move"—Publishers Weekly

"[I]ntroduces an important event in a snappy text that swings. Ransome’s line-and-watercolor pictures also flow with movement and color. Kids drawn in by the story of the young artists will go on to ponder the history."—Booklist

" A solid exploration of a resonant musical partnership at a historically significant moment in American music."—Kirkus Reviews

"This book is a great starting point for students to discover two jazz greats."—Library Media Connection

Lesa Cline-Ransome and James Ransome have collaborated on many award-winning picture books for children. These include Satchel Paige, which was an ALA Best Book for Children and Words Set Me Free: The Story of Young Frederick Douglass, which received starred reviews in Booklist and School Library Journal. The Quilt Alphabet was praised as "A blue-ribbon ABC book that combines bright, folksy oil paintings and lilting riddle-poems," in a starred review in Publishers Weekly and called "a feast for the eyes" in School Library Journal. They live in the Hudson River Valley region of New York.
Loading...
or support indie stores by buying on