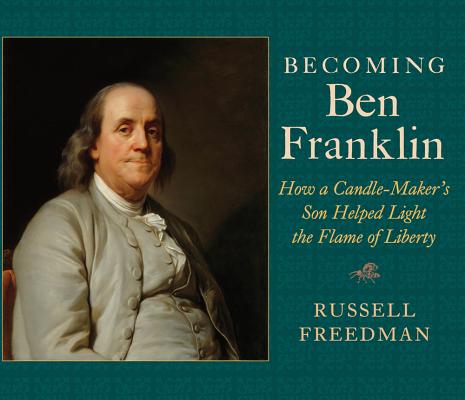 How a Candle-Maker's Son Helped Light the Flame of Liberty

In 1723 Ben Franklin arrived in Philadelphia as a poor and friendless seventeen-year-old who had run away from his family and an apprenticeship in Boston. Sixty-two years later he stepped ashore in nearly the same spot but was greeted by cannons, bells, and a cheering crowd, now a distinguished statesman, renowned author, and world-famous scientist. Freedman's riveting story of how a rebellious apprentice became an American icon comes in an elegantly designed book filled with art and includes a timeline, source notes, bibliography, and index

Russell Freedman is well known for his riveting biographies and masterful accounts of the history of the United States. One of the most honored writers for children, Russell Freedman has been honored with the Newbery Medal, three Newbery Honor Medals, the Laura Ingalls Wilder Award, the May Hill Arbuthnot Honor Lecture Award, and a National Humanities Medal. He travels widely but makes his home in New York City.
Loading...
or
Not Currently Available for Direct Purchase