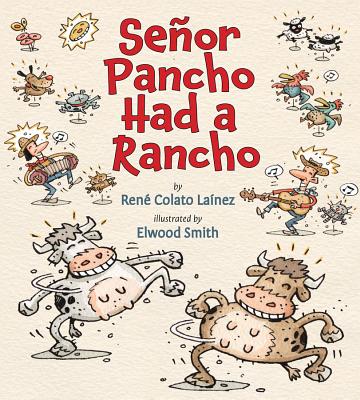 Senor Pancho Had a Rancho

When it comes to having fun, everyone speaks the same language!


"Old MacDonald Had a Farm" goes multicultural in this rollicking Spanish-English rendition. An abundance of onomatopoeia and tongue-twisters encourages children to laugh and sing along. The colorful illustrations perfectly match the silly text, comparing the two farms and their playful, singing animals.

The barnyard animals on Old MacDonald's and Señor Pancho's farms have a hard time communicating. MacDonald's rooster says cock-a doodle-doo! while Señor Pancho's gallo says quiquiriquí. The English-speaking chick says peep, peep, but el pollito says pio, pio. Then the cow says moo—and la vaca says mu! Maybe they're not so different after all! The animals come together for a barnyard fiesta in a celebration of languages.

A pronunciation guide is included for readers and teachers. This book was awarded Bank Street’s Book of the Year.

Praise For Senor Pancho Had a Rancho…

"Chock-full of bicultural fun on the farm."—Kirkus Reviews

"The multimedia ink and watercolor cartoons provide a visual feast, striking a solid balance between engaging detail and white space while ably moving the narrative forward. Smith's farmyard animals steal the show; they are full of humor and a playful energy to which young readers will relate. This is an excellent choice for read-alouds, but it also includes a glossary and pronunciation guide, making it useful in one-on-one contexts for young readers looking to develop Spanish vocabulary."—School Library Journal

"this humorous rendition of the song should be part of any library where singing is allowed."—Booklist

"The energetic illustrations are a good match for the lively reworked lyrics, which include Spanish words and animal sounds."—The Horn Book

René Colato Laínez is an award-winning author born in El Salvador. He currently lives in Southern California where he teaches kindergartners in a bilingual classroom. Other titles by René Colato Laínez include ¡Vámonos! Let’s Go! and Mamá the Alien.

Elwood Smith has illustrated more than a dozen books for children, including Zoo Ah-choooo by Peter Mandel. A guitar player, Smith has written songs and two musicals. He lives in the Hudson River Valley.
Loading...
or
Not Currently Available for Direct Purchase