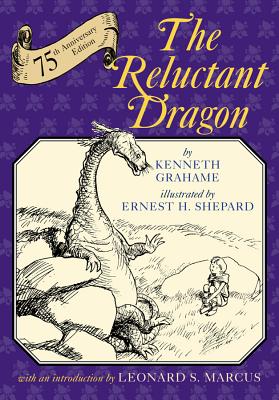 From the author of The Wind In the Willows and illustrator of Winnie the Pooh, comes the original, high-quality edition of this classic story later made into a Disney movie.

In this beloved classic, a kind, young boy befriends a poetry-loving dragon living in the Downs above his home. When the town-folk send for St. George to slay the dragon, the boy must come up with a clever plan to save his friend and convince the townsfolk to accept him.

A timeless book wth fun for adults and children, the story celebrates difference, empathy, and standing with our friends even when things look tough. A great read-aloud.

Continuously in print since 1938, this story appeared as a chapter in Kenneth Grahame's Dream Days and was first published as a stand-alone book with black and white illustrations throughout by Ernest H. Shepard--revisiting a collaboration first made famous through The Wind in the Willows.

Kenneth Grahame was born in 1859. From the age of five, he lived with his grandmother in Cookham Dean, Berkshire, where he spent a lot of time on the banks of the River Thames. It was here that he wrote The Reluctant Dragon, which was first published in Dream Days in 1898, ten years before the publication of his most famous work, The Wind in the Willows.

Ernest Howard Shepard (December 10, 1879 – March 24, 1976) was an English artist and book illustrator. He was known especially for his human-like animals in illustrations for The Wind in the Willows by Kenneth Grahame and Winnie-the-Pooh by A. A. Milne.

Leonard S. Marcus is the children's book industry's most respected historian and critic. His many books include Margaret Wise Brown: Awakened by the Moon and Dear Genius: The Letters of Ursula Nordstrom. He is a frequent contributor to the New York Times Book Review, Washington Post Book World, Parenting magazine, the Horn Book, and Publishers Weekly.
or
Not Currently Available for Direct Purchase
Copyright © 2020 American Booksellers Association