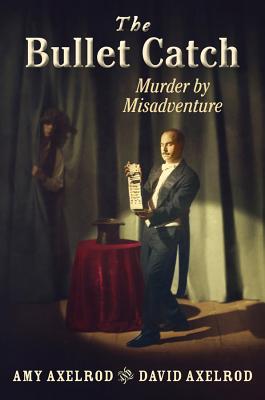 When the orphanage he called home burns to the ground, 14-year-old Leo and his three friends turn to larceny. But when Leo is cruelly betrayed by his gang, he becomes the apprentice of a has-been magician named Barzini. With help from the great Harry Houdini, Barzini is staging a comeback, complete with an improved variation on the bullet catch trick made famous by his arch enemy, Chung Ling Soo. He wants more than to outshine his old rival; he is out for revenge. As Leo struggles to escape his dangerous past, he fears that his new mentor is even more dangerous. This spellbinding mystery chronicles the coming-of-age of a young man who refashions his destiny amid murder and misadventure in the golden age of magic.

Amy Axelrod was born and grew up in Massachusetts. She studied sociology and German at Brandeis University and received a master's degree in linguisitics from Columbia University. She has written one novel for young readers, Your Friend in Fashion, Abby Shapiro, and many picture books, including the best-selling Pigs Will Be Pigs math series. She lives in the Hudson Valley in New York State with her husband.

David Axelrod, Amy's son, grew up in the Hudson Valley of New York. He has written several critically acclaimed books for young adults under pseudonyms and currently works in book publishing. He lives in New York City with his wife.
Loading...
or
Not Currently Available for Direct Purchase