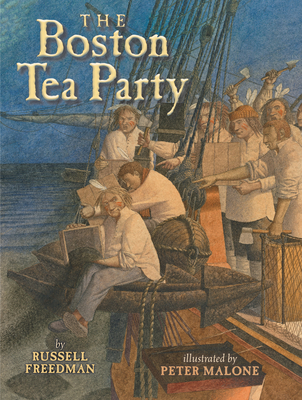 Follow a crowd of disguised protestors through the quiet streets of colonial Boston as they defend their right to control their own destinies.

Russell Freedman's engaging narrative, incorporating meticulous research and quotes from contemporary accounts, follows the rising tensions between the citizens of Boston and representatives of the British Crown. From the controversial, unpopular taxes on tea through the defiant act of dumping hundreds of chests of British cargo into the harbor, this exciting retelling puts readers in the middle of this historic event.

Detailed watercolor illustrations bring this story of early American protest to life, artfully depicting the colonial era and the charged atmosphere of Boston in the weeks leading up to the Boston Tea Party.  Informational backmatter includes a bibliography, index, and historic map of Boston.

A perfect introduction to a pivotal moment in American history for young readers.

Praise For The Boston Tea Party…

Russell Freedman (1929-2018) transformed non-fiction for children through his insightful narrative, comprehensive research, careful selection of photographs, and deep understanding of his subject matter. He was well known for his riveting biographies and masterful accounts of the history of the United States. One of the most honored writers for children, his many awards include the Newbery Medal, three Newbery Honor Medals, the Laura Ingalls Wilder Award, the May Hill Arbuthnot Honor Lecture Award and a National Humanities Medal. Major works include Freedom Walkers; Lincoln: A Photobiography; Because They Marched; The Wright Brothers: How They Invented The Airplane; Vietnam: A History of the War.

Peter Malone’s fine artist prints are widely collected. His illustrations have appeared in The New Yorker as well as in books for children. He lives in England.
Loading...
or support indie stores by buying on