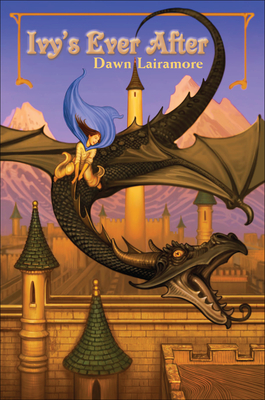 Who needs Prince Charming? Dragons are much better company.

If her fairy godmother hadn't run off, if her father hadn't lost his mind, if her mother had lived—maybe Ivy would have been a proper princess. But as it is she has no time for dignified pursuits like needlework or harp lessons, when she could be roaming the wilds of the kingdom of Ardendale, playing with the servants' children, and reading old tales of glory.

But there's one tradition Ivy can't escape: on her fourteenth birthday, she is to be imprisoned in a tower guarded by a fierce dragon, and the first valiant prince to come slay the beast will win her hand in marriage. Maybe she could resign herself to it—until she uncovers Prince Romil's wicked plan to murder her and her father, and turn their lush kingdom into the heart of his empire.

Locked away, there's only one ally Ivy can turn to—the fierce, monstrous beast keeping her trapped in her tower. But it turns out the dragon Elridge is better at solving word puzzles than breathing fire. . . . and maybe this unconventional pair is exactly what the kingdom needs.

Praise For Ivy's Ever After…

* "This is a fun and entertaining fairy-tale-based fantasy with a nice balance of character development and action."—School Library Journal, Starred Review

"Ivy is an engaging alternative to the standard damsel-in-distress figure, and with a lushly vivid setting, witty dialogue, and lots of adventure, this well-plotted first novel will appeal."—Booklist

"The plot moves along at a fast clip, sweeping readers into Ivy's fairy-tale adventure."—The Bulletin

Dawn Lairamore lives in northern California, where she works as a paralegal. In a starred review of her first book, Ivy's Ever After, School Library Journal wrote, "A fun and entertaining fairy-tale-based fantasy with a nice balance of character development and action," and Kirkus Reviews predicted, "This fractured fairy tale will delight tween readers."
Loading...
or
Not Currently Available for Direct Purchase