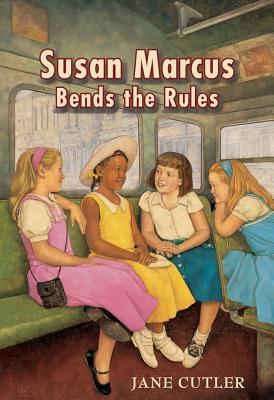 You wouldn't even know there was a war on, thinks Susan Marcus as she surveys her new neighborhood in Clayton, Missouri. There are no air raid wardens, no blackout curtains. It's so different from her old home in New York City: no tall apartment buildings, no bustling city streets. Susan can barely understand people, their accents are so thick, and of course eveyone in Clayton is a St. Louis Cardinals fan and sworn enemy of Susan's beloved New York Yankees. Worst of all, for the first time in her life, ten-year-old Susan encounters prejudice -- against New Yorkers, Jews, blacks, and the Japanese. She must be circumspect about her friendship with Loretta (the daughter of the black janitor), for Jim Crow laws still exist in 1943 Missouri. Outraged, Susan decides to strike a blow against them. She's not going to break the rules exactly; she's just going to bend them.

Jane Cutler has written novels and picture books for children, including Spaceman, which was nominated for the Mark Twain Award and the William Allen White Children's Book Award, and The Cello of Mr. O, which won the Zena Sutherland Prize, the 2000 Paterson Prize for Books for Young People, and the New Mexico Land of Enchantment Book Award. She lives in San Francisco, California.
Loading...
or
Not Currently Available for Direct Purchase