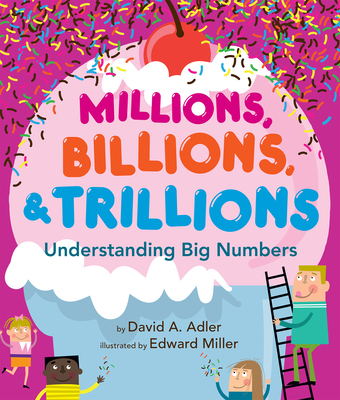 How long would it take to count to a billion without stopping? How many pizzas could a million dollars buy?

Big numbers-- like millions, billions, and trillions-- are hard to visualize.  In this book, the dynamic duo of David A. Adler and Edward Miller illustrate and explain these huge numbers in a lighthearted, easy-to-imagine way.

Whether it's a trillion pieces of popcorn, a billion dollars, or even bigger numbers, the concrete examples in Millions, Billions, & Trillions, laid out in simple, kid-friendly language and bright, cartoony illustrations, will help young readers make sense of large values and develop a sense of scale.

From the masterful team of David A. Adler-- a former math teacher-- and Edward Miller comes another great introduction to mathematical concepts for young readers. Don't miss their other collaborations, including Squares, Rectangles, and Other Quadrilaterals, Money Math, Place Value, and Let's Estimate!

"This accessible picture book presents big numbers, considers how we use them, and offers a sense of the quantities they represent. . . . Adler’s text is imaginative as well as logical, and Miller’s brightly colored digital illustrations are cheerful and inventive."—Booklist

"The text is well organized, so the concepts build on one another, and Miller's digital pictures, with smiley-faced children front and center, illustrate the ideas in kid-friendly ways."—The Horn Book

"Adler does a wonderful job of helping school-age children understand the concept that a million is a heck of a lot. . . . The book is perfectly suited to elementary students, who are able to think conceptually, and their foundational knowledge of math will help them make the leaps they will need to take to understand millions, billions, and trillions. For curious children who find numbers intriguing, this book is right on the money."—School Library Journal

David A. Adler taught math for eight years. In that time he learned many things from his students -- including the fact that they thought fractions were hard. So he decided to prove that learning how to work with fractions is not only easy, but also fun! He lives with his family on Long Island. You can learn more about him at www. davidaadler.com.

Edward Miller loves to make concepts clear to kids and has demonstrated that in his previous nonfiction books. School Library Journal praised his Alphabeep: A Zipping, Zooming ABC by Debora Pearson as "stunningly illustrated." He lives in New York City. You can visit his website at www.edmiller.com.
Loading...
or support indie stores by buying on
(This book is on backorder)