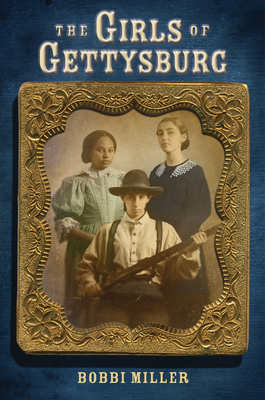 The Girls of Gettysburg

A gripping historical novel in which the fates of three young girls collide amidst the chaos of the American Civil War.

Disguised as a boy, thirteen-year-old Annie Gordon becomes a soldier and joins the Portsmouth Rifles of the 9th Virginia Infantry as they march north to Gettysburg.

Tillie Pierce, the frivolous fourteen-year-old daughter of a wealthy merchant finds herself surrounded by a vicious battle, destroying her romanticized notion of war.

Defiantly, Grace Bryan and her father refuse to flee with the other free black citizens of Gettysburg, who fear the rebels will arrest them as fugitive slaves, determined to help others

Everything comes to a head on the final day of the battle with Pickett's Charge, the suicidal Confederate assault on Gettysburg-- when the  which the lives of the three girls--a Yankee, a rebel and a free black--are linked and forever changed.

Bobbi Miller's well-researched novel draws on actual accounts of the Battle of Gettysburg, weaving an unforgettable tale of the tragedies and triumphs, the humanity, heartache, and heroism of this Civil War battle.  Told in fast-paced chapters with alternating points of view, The Girls of Gettysburg is a fascinating glimpse at the different worlds that existed, side by side, in this tumultuous moment. Perfect for introducing young readers to the complexities of the Civil War, and the ways in which our experiences shape our lives.

Praise For The Girls of Gettysburg…

"A gripping read about the brutal realities of war that will pack an emotional punch with young readers."—The Horn Book

"A unique, exciting work based on published diaries, accounts, and other primary sources."—Booklist

Bobbi Miller is a children's book author who has five degrees in writing, two at the graduate level. She loves exploring the American landscape and spinning tall tales. Her first historical novel, Big River's Daughter, received wide critical acclaim .She has also written three picture books set in the American landscape, Davy Crockett Gets Hitched, Miss Sally Ann and the Panther, and One Fine Trade, which School Library Journal praised for its "lively language that is full of rhythm and fun to read aloud." A native of Colorado, she now lives in Connecticut. Learn more at www.bobbimillerbooks.com.
Loading...
or
Not Currently Available for Direct Purchase