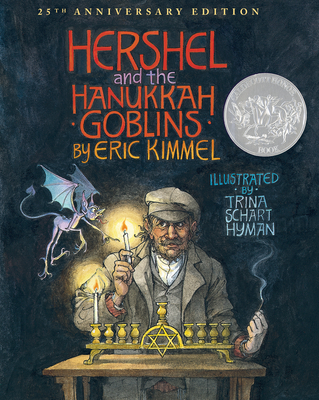 Hershel and the Hanukkah Goblins

On the first night of Hanukkah, a weary traveler named Hershel of Ostropol eagerly approaches a village, where plenty of latkes and merriment should warm him.

But when he arrives not a single candle is lit. A band of frightful goblins has taken over the synagogue, and the villagers cannot celebrate at all! Hershel vows to help them. Using his wits, the clever trickster faces down one goblin after the next, night after night.  But can one man alone save Hanukkah and live to tell the tale?

An original adventure featuring a traditional Jewish folk hero, this clever story has been a family favorite for decades and was named a Caldecott Honor book when it was originally published, and received a Sydney Taylor Award Honor.  Trina Schart Hyman’s leering goblins are equal parts terrifying and ridiculous as they match wits with Hershel, trying to keep him from lighting the menorah and celebrating Hanukkah.

This beautiful 25th Anniversary Edition includes an insightful afterword from the author and publisher explaining the book's origins, and remembering Trina Schart Hyman, the illustrator who brought the tale to life.  This classic picture book is a perfect Hanukkah gift and a wonderful read-aloud.

For more tales of this clever folk hero, read The Adventures of Hershel of Ostropol— another collaboration between master storyteller Eric A. Kimmel and Trina Schart Hyman.

Praise For Hershel and the Hanukkah Goblins: 25th Anniversary Edition…

★ "In this splendidly illustrated, humorous tale, Hershel outwits, one by one, eight fearsome goblins who not only haunt an old synagogue, but also have been forestalling Hanukkah in a nearby village . . . Rarely are author and illustrator so in tune."—Kirkus Reviews, Starred Review

"Hyman is at her best with windswept landscapes, dark interiors, close portraiture, and imaginatively wicked creatures. Both art and history are charged with energy."—The Bulletin of the Center for Children's Books

"This is a story whose essentials—cleverness, bravery, and otherworldly happenings— always attract readers."—Booklist

"This original story in the tradition of Yiddish tales about Hershel Ostropolier is welcome as a Hanukkah story and as a trickster tale. . . . Hyman's illustrations capture Hershel's humor and earthy, peasant quality."—The Horn Book

Eric A. Kimmel has published more than fifty children's books, many of which have won state awards and appeared on school and library recommended lists. He has won the National Jewish Book Award for numerous books, including Hanukkah Bear and The Mysterious Guest: A Sukkot Story, and the Sydney Taylor Lifetime Achievement Award. He lives in Portland, Oregon.

One of the most distinguished and celebrated illustrators of her generation, Trina Schart Hyman (1939-2004) was awarded the Caldecott Medal for St. George and the Dragon, retold by Margaret Hodges, and Caldecott Honors for A Child's Calendar, by John Updike, Hershel and the Hanukkah Goblins, and Little Red Riding Hood. Born in Philadelphia, she lived most of her life in New Hampshire.
or support indie stores by buying on