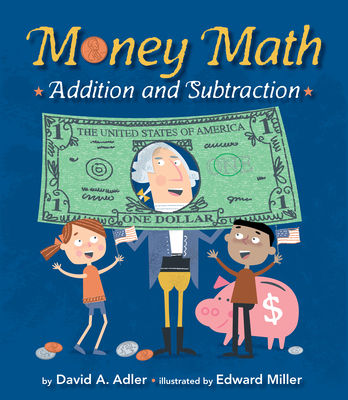 This primer on money will change how you see addition and subtraction.

What can a handful of coins get you? Well, it depends on how many you've got. . . . and what they are.

In this fun introduction to American currency, a variety of past presidents introduce themselves and their denominations. You'll learn who's on each coin and bill, and what they're worth-- and how many of one it takes to add up to another. Dollars, cents, and decimals are explained in accessible, kid-friendly language, with tons of examples and try-it-yourself problems and activities.

The mathematical concepts of addition, subtraction, multiplication and division become hands-on in this innovative math book from trusted duo David A. Adler and Edward Miller, whose award-winning collaborations have been helping students tackle complicated problems for years.

After reading Money Math, kids will be confident with their pocket change!

* "Both Adler and Miller use a winning clarity of expression—one with words, the other with images and caricatures—to maximize the operations involved in toting up coins and keep readers visually stimulated....A purse full of entertainment tucked into a merry primer on money math."—Kirkus Reviews, Starred Review

David A. Adler taught math for eight years. In that time he learned many things from his students -- including the fact that they thought fractions were hard. So he decided to prove that learning how to work with fractions is not only easy, but also fun! He lives with his family on Long Island. You can learn more about him at www. davidaadler.com.

Edward Miller loves to make concepts clear to kids and has demonstrated that in his previous nonfiction books. School Library Journal praised his Alphabeep: A Zipping, Zooming ABC by Debora Pearson as "stunningly illustrated." He lives in New York City. You can visit his website at www.edmiller.com.
Loading...
or
Not Currently Available for Direct Purchase