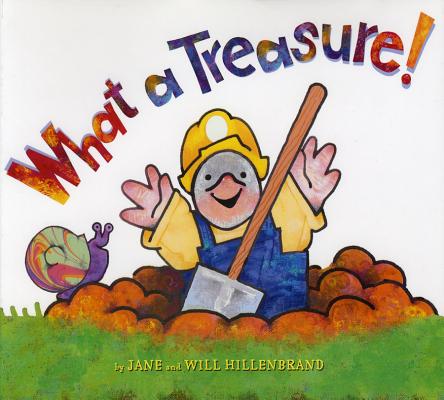 What a Treasure! (Board book)

Dig deep with Mole to uncover the best treasures of all in this sweet story.

Hunting for buried treasure, Mole unearths a twig. It's not much use to him, but a bird flying by wants it for a nest. When he discovers a shell, Mole gives it to Snail for a cozy home. Happy to share, Mole keeps digging, and uncovers—another hole, with another little mole in it. A new friend—what a treasure indeed.

Brightly colored illustrations enhance this simple story about friendship, sharing, and perseverance, created by husband and wife team Jane and Will Hillenbrand. Perfect for sharing with your own treasured friends, this is an ideal read-aloud for emerging readers.

Jane Hillenbrand is an elementary school teacher. What a Treasure! was her first picture book. Publishers Weekly called it a "warm look at appreciating the small, often unexpected, joys in one's life." She lives in Ohio with her husband, Will Hillenbrand.

Will Hillenbrand has illustrated a wide range of picture books for children, including many he has written himself. Spring Is Here won the Please Touch Museum Book Award. Kite Day was proclaimed "a winner for story times" in a School Library Journal starred review. Off We Go! was declared "a winner all around" in a Kirkus starred review. Will lives with his wife, Jane Hillenbrand, in Ohio.

Praise For What a Treasure!…

* "Have shovel, will dig. Such is the simplicity of young Mole’s experiences in this warm look at appreciating the small, often unexpected, joys in one’s life."―Publishers Weekly, starred review

"This simply told story has what it takes to entertain the youngest story-time audience: eye-catching illustrations; a straightforward, good-natured narrative with some well-placed repetitions; lots of digging; and a gratifying ending."―The Horn Book

"Told with minimal text, this book celebrates friendship while quietly calling attention to the fact that treasure is relative." —School Library Journal

"The day that Mole gets his new shovel, he starts to dig for treasure despite his brother betting that he won’t find any.  The first things Mole finds is a twig (which a bird thinks is a treasure).  Digging further, he finds a shell (treasure to a snail), an acorn (treasure to a squirrel) and finally, another hole where a little mole pops up―a real treasure: a friend for Mole."—Kirkus Reviews
or support indie stores by buying on
Copyright © 2020 American Booksellers Association