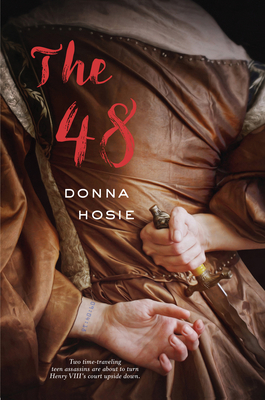 Twins Charlie and Alex Douglas are the newest time travelers recruited to the Forty-Eight, a clandestine military group in charge of manipulating history. The brothers are tasked with preventing Henry VIII from marrying Jane Seymour and arrive in 1536 feeling confident, but the Tudor court is not all banquets and merriment: it is a deep well of treachery, torture, lust, intrigue, and suspicion.

That makes it especially dangerous for young people who refuse to "know their place"--young women who might, say, want to marry for love instead of status, or young men who would feel free to love each other, if it weren't forbidden. Told in alternating perspectives among Charlie, Alex, and sixteen-year-old Lady Margaret, a ladies' maid to Queen Anne Boleyn, The 48 captures the sights, smells, sounds, and hazards of an unhinged Henry VIII's court from the viewpoint of one person who lived that history--and two teens who have been sent to turn it upside down.

Includes an author's note touching on her inspiration for the book and the research she did to bring the Tudor Court to life.

"Readers will be completely captivated by the mystery and history in this adventure, and be swept away by the thrilling suspense."—Booklist

"A fast-paced, well-researched, clever tale of loyalty, torture, and the power of persistence."—Kirkus Reviews

"This is well-researched historical fiction set inside a science fiction story. Hosie brings Henry’s court to life with the sights, smells, and sounds of Tudor England without wordy and overly long descriptions. The time period is in no way romanticized, and through vivid writing the reader is assaulted with the stink of open sewers, the uncertainty of serving a despotic king, and the hopelessness experienced by women of the era. The chapters are told from the alternating perspectives of Charles, Alexander, and Lady Margaret, a high-born woman serving the queen. . . . The story hits the ground running, leaving readers feeling like they have been thrown into the middle of the story, but it quickly resolves itself into a tale that grips you and does not let go."—School Library Connection

Donna Hosie is the British author of the acclaimed The Devil's Intern, which was named a Kirkus Reviews Best Teen Book of the Year and a YALSA Best Fiction for Young Adults, and its sequels The Devil's Dreamcatcher and The Devil's Banshee. The House of Tudor has always intrigued her, and she did copious research to recreate this disturbing and fascinating point in time for The 48.
Loading...
or
Not Currently Available for Direct Purchase