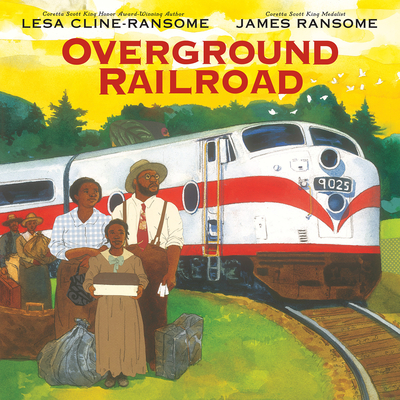 Climbing aboard the New York bound Silver Meteor train, Ruth Ellen embarks upon a journey toward a new life up North-- one she can't begin to imagine. Stop by stop, the perceptive young narrator tells her journey in poems, leaving behind the cotton fields and distant Blue Ridge mountains.

★ "Warm portraiture and vivid writing by married collaborators Cline-Ransome and Ransome (Before She Was Harriet) mark this story of a family’s journey north during the Great Migration. . . . The journey is seen through the eyes of richly developed characters drawn with care and sympathy."—Publishers Weekly, Starred Review

★ "Ransome’s beautiful illustrations feature detailed and expressive faces and layers of bright patterned paper that add colorful accents to the muted palette. . . . An author’s note gives readers historical context, placing the story in the era of the Great Migration, inspired by just one story of the many who were, 'running from and running to at the same time.'"—School Library Journal, Starred Review

★ "Cline-Ransome’s carefully cadenced ragged-right prose, suitable for reading aloud or reading alone, offers sharply observed details . . . . James Ransome’s line, watercolor, and collage scenes move fluidly from epic landscape scenes, often dotted with the deceptively beautiful cotton, to eloquent facial portraiture; the movement of the gleaming train through the landscapes is paralleled occasionally by glimpses of a young Frederick Douglass heading North on foot. There’s something about the Great Migration that brings out talent"—The Bulletin of the Center for Children’s Books, Starred Review

"A tour de force from a writer/illustrator duo that is a national treasure."— The Historical Novel Society


"Through handsome collage, pencil and watercolor illustrations and lyrical free verse, the family's hopeful journey to find better jobs, homes and rights shows readers a major moment in the large scope of African American history. . . . Young readers will likely be drawn in by the author's riff on a familiar phrase in the title, as well as the spare but poetic language in which Ruthie narrates her long day's journey"—Shelf Awareness

"Ruth Ellen is reading Narrative of the Life of Frederick Douglass on the train, and Cline-Ransome generalizes the details of Douglass’s own escape to emphasize the similarities in the two situations . . . Ransome does an admirable job of setting mood as well as establishing time and place."—The Horn Book

Lesa Cline-Ransome is the author of more than twenty books for young readers including the award-winning Finding Langston trilogy. Her work has received a plethora of honors, including dozens of starred reviews, NAACP Image Award nominations, a Coretta Scott King honor, the Scott O’Dell Award for Historical Fiction and a Christopher Award. Her work has been named to ALA Notable Books and Bank Street Best Children’s Book lists and she lives in the Hudson Valley region of New York.