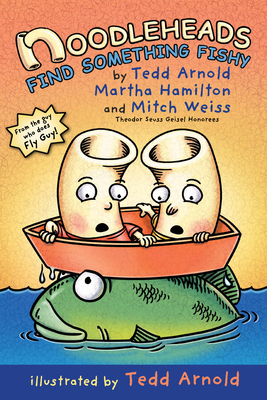 Mac and Mac, as gullible as ever, decide that since fish live in schools, they must be smart. The fish in this funny story certainly are smart enough to outwit Mac and Mac--and so is their friend Meatball, who shows them how to get a bigger boat. But there's something fishy about his suggestion. . .

This easy-to-read series, including the Geisel Honor book Noodleheads See the Future, is an accessible introduction to stories of fools, and a great next read for fans of the Fly Guy books.

Praise For Noodleheads Find Something Fishy…

* "The Noodlehead brothers, Mac and Mac, are back in this irresistibly funny graphic novel about misunderstandings and mistakes. . . . Kids will feel like they have the upper hand while also reveling in Mac and Mac’s foibles, and they might even learn a thing or two about logical reasoning. Even Mac and Mac learn something by the end, but when it comes down to it, they’re still the same old Noodleheads. A must-buy for graphic novel collections."—School Library Journal, Starred Review


"Readers will come away with plenty of laughs. The introduction and three short chapters are filled with brightly colored comics panels in Arnold's signature art style. Fans won't want to miss the boat on this one."—Kirkus Reviews


With more than 20 million books in print, TEDD ARNOLD is the best-selling author-illustrator of No Jumping on the Bed, Parts,Rat Life, and the Fly Guy series, including two Theodor Seuss Geisel Award Honor books..
Loading...
or support indie stores by buying on