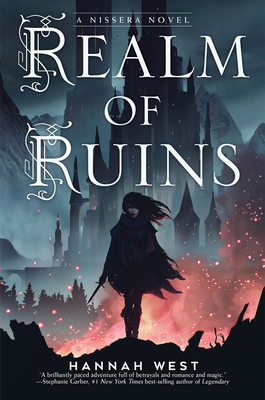 Valory’s power is different—it’s dangerous, unruly, and destructive. Can she channel it to save the realm from chaos . . . or will her magic master her?

A century after her legendary ancestors overcame a bloodthirsty tyrant, seventeen-year-old Valory Braiosa attends a training academy for elicromancers, immortal beings with magical gifts. But Valory’s immense power isn't like that of her peers— it seems impossible to tame, and she faces imprisonment by the Nisseran authorities.

But when a forbidden resurrection spell awakens a long-dormant evil, Valory may be the only one who can vanquish this terrifying villain. Together with a band of allies—including an old friend; a haughty princess; and a mysterious, handsome stranger—Valory must learn to harness her power and fight back.  Dark magic, romance, and an ancient evil make Realm of Ruins a harrowing page-turner.

“A brilliantly paced adventure full of betrayals and romance and magic. I could have stayed and played in this treacherous world for a long time.” – Stephanie Garber, #1 New York Times best-selling author of Legendary

Weaving together her imaginative world of magic with snippets from Beauty and the Beast and other classic stories, Hannah West’s gritty adventure is a thrilling, immersive companion to her acclaimed debut. Read this first and then discover the rest of Nissera or start with Kingdom of Ash and Briars—either way, you’ll love the journey.

Praise For Realm of Ruins: A Nissera Novel (The Nissera Chronicles #2)…

"West’s return to the swirling, fantastical world filled with magic and terror is a welcome addition to collections."—Booklist

"A treasure hunt for fans of fairy tales and fantasy. Realm of Ruins is a brilliantly paced adventure full of betrayals and romance and magic that sometimes has a mind of its own. I could have stayed and played in this treacherous world for a long time."—Stephanie Garber, #1 New York Times best-selling author of Legendary

Hannah West's debut novel, Kingdom of Ash and Briars, received a starred review from Kirkus Reviews and was named one of their Best Teen Books of the Year. Inspired by fairy tale castles and snowy winter days, Hannah began writing the book as a college junior studying abroad in France. Realm of Ruins is her second novel. She lives in Texas with her husband, Vince, and their two dogs. Visit her at www.hannahwestauthor.com and on Twitter @hannahwestya.
Loading...
or
Not Currently Available for Direct Purchase