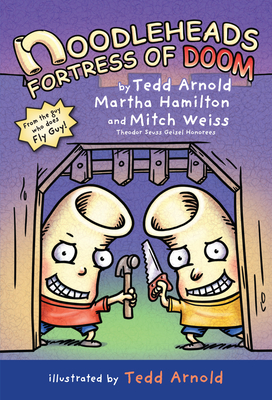 Mac and Mac may be noodles with empty heads, but they have big ideas: building a fortress! This vibrantly colorful graphic novel for easy readers hits the nail on the head with comedy.

The Noodlehead brothers are back from the library with a joke book, a fantasy novel, and a dream: to build their very own Fortress of Doom. If they can stop bickering for long enough. And if they can defend it from their wily friend Meatball.

Jump right in with this fourth title in an easy-to-read graphic novel series about more than two hollow pastas trying to have fun.

Award-winning storytellers Mitch Weiss and Martha Hamilton join Tedd Arnold, author of the Fly Guy series, to create a masterpiece of hilarity. This easy-to-read series, including the Geisel Honor book Noodleheads See the Future, is an accessible introduction to stories of fools, and a great next read for fans of the Fly Guy books.

With short, funny chapters full of wordplay, jokes, and slapstick humor, the Noodleheads series is sure to delight.

Based on traditional world folktales and stories of fools, the Noodleheads also encourage critical thinking, inviting kids to use their noodles- spotting the holes in the brothers' grand plans, and anticipating how things will go awry.

Praise For Noodleheads Fortress of Doom…

"A generous font, amusing comic-book-style artwork, the stories themselves, and excellent notes add up to a book that can be thoroughly enjoyed by one child or easily acted out in a readers' theater activity. Very old, very funny stories made evergreen thanks to the graphic format and inventive casting." —Kirkus Reviews

"The Noodleheads are back and as clueless as ever in this latest installment. . .  . Arnold's buoyant illustrations and the protagonists' goofy dialogue are sure to entice readers. Part of the joy of the series is the authors' notes at the end explaining the historical basis behind the Noodleheads' foibles." —School Library Journal

Tedd Arnold is the best-selling author-illustrator of the Fly Guy series, with two Theodor Seuss Geisel Award Honor books and more than 18.5 million books in print. He is author and illustrator of Dirty Gert, Vincent Paints His House, and Fix This Mess, an I Like to Read book. He is co-author and illustrator of Noodlehead Nightmares and Noodleheads See the Future, a Theodor Seuss Geisel Award Honor Book, an American Library Association Notable Book, and winner of the American Folklore Society's Aesop Prize.