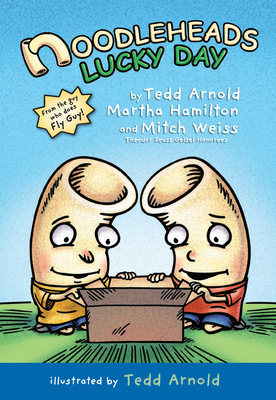 You'll laugh out loud when Mac and Mac try to hatch a kitten. . . out of a watermelon. This easy-to-read intro to graphic novels is perfect for "fans of all things goofy" according to School Library Journal.

Twin brothers Mac and Mac are soooo lucky. How lucky are they?

Illustrated by Tedd Arnold, whose Fly Guy series is a kid favorite, this fifth book in the Noodleheads graphic novel series is perfect for comic fans and reluctant readers, with short, funny chapters following Mac and Mac through ridiculous adventures. Full of wordplay, jokes, and slapstick humor, the Noodlehead series is sure to delight.

"Fun-loving kids will laugh out loud as Mac and Mac make mistakes but end up OK. Adults will enjoy the excellent story source notes. Children who appreciate being a little smarter than the characters they read about will relish it."—Kirkus Reviews

Tedd Arnold is the best-selling author-illustrator of the Fly Guy series, with two Theodor Seuss Geisel Award Honor books and more than 18.5 million books in print. He is author and illustrator of Dirty Gert, Vincent Paints His House, and Fix This Mess, an I Like to Read book. He is co-author and illustrator of the Noodleheads series, including Noodleheads See the Future, a Theodor Seuss Geisel Award Honor Book, an American Library Association Notable Book, and winner of the American Folklore Society's Aesop Prize.

Martha Hamilton and Mitch Weiss are acclaimed storytellers who have won an Irma Simonton Black Award for Excellence in Children's Literature, two Storytelling World Awards, and an Anne Izard Storytellers' Choice Award. With Tedd Arnold, they are co-authors of the Noodleheads series, including Noodleheads See the Future, a Theodor Seuss Geisel Award Honor Book, an American Library Association Notable Book, and winner of the American Folklore Society's Aesop Prize.