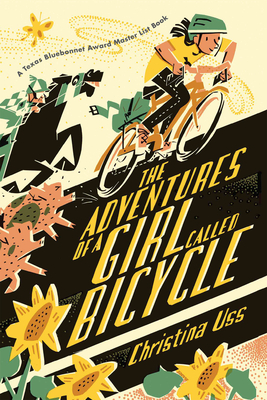 The Adventures of a Girl Called Bicycle

“A funny, heartwarming, and infinitely imaginative story about a friendless 12-year-old girl determined to ride across the country to befriend her hero, Polish bicycling champion Zbigniew Sienkiewicz. Along the way she meets ghosts, pie-makers, and crazy inventors; gets run over in a pig stampede; and accidentally launches a missile. And that’s when she’s not being chased by the mysterious woman in black. A fun, can’t-miss summer read for everyone!”
— Chris Abouzeid, Belmont Books, Belmont, MA
View the List

A determined 12-year-old girl bikes across the country in this quirky and charming debut middle grade novel.

Introverted Bicycle has lived most of her life at the Mostly Silent Monastery in Washington, D.C. When her guardian, Sister Wanda, announces that Bicycle is going to attend a camp where she will learn to make friends, Bicycle says no way and sets off on her bike for San Francisco to meet her idol, a famous cyclist, certain he will be her first true friend.

Who knew that a ghost would haunt her handlebars and that she would have to contend with bike-hating dogs, a bike-loving horse, bike-crushing pigs, and a mysterious lady dressed in black. Over the uphills and downhills of her journey, Bicycle discovers that friends are not such a bad thing to have after all, and that a dozen cookies really can solve most problems.

Praise For The Adventures of a Girl Called Bicycle…

"“Readers who enjoy action and adventure with a dose of magic will happily go along for the ride."—Booklist

CHRISTINA USS has written about bicycling and travel for many magazines and newspapers. The Adventures of a Girl Called Bicycle was inspired in part by her own experiences while biking across the United States, once widthwise and once lengthwise.
Loading...
or
Not Currently Available for Direct Purchase