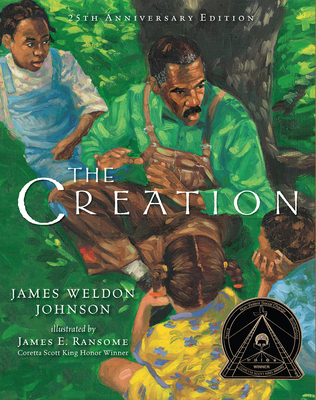 James Weldon Johnson, author of the civil rights anthem "Lift Ev'ry Voice and Sing," wrote this beautiful Bible-learning story in 1922, at the height of the Harlem Renaissance. Set in the Deep South, The Creation alternates breathtaking scenes from Genesis with images of a country preacher under a tree retelling the story for children. The exquisite detail of James E. Ransome's sun-dappled paintings and the sophisticated rhythm of the free verse pay tribute to Black American oral traditions of country sermonizing and storytelling: As far as the eye of God could see/ Darkness covered everything/ Blacker than a hundred midnights/ Down in a cypress swamp. . . .

This beautiful new edition of the classic Coretta Scott King Award winner features a fresh, modern design, a reimagined cover, and an introduction of the remarkable life of James Weldon Johnson. Beneath the dust jacket, the case features a detail of Ransome's beautiful night sky, spangled with stars.

"Illustrating this verse adaptation of the biblical Creation story, Ransome intersperses paintings of natural wonders with scenes of an African American man reciting to an audience of rapt youngsters."—Publishers Weekly

"Pictures of an African-American preacher and his rapt audience of children alternate with handsome full-bleed spreads depicting the six days of creation... Rhythmic friezes of animals adorn the text pages of this carefully structured, realistic presentation...Painted with real artistry and conviction."—Kirkus Reviews

James Weldon Johnson (1871-1938) was a civil rights activist and Renaissance man: variously, he was a lawyer, author, poet, songwriter, professor, and even a diplomat in Teddy Roosevelt's administration. Some of his most famous works include the anthem "Lift Ev'ry Voice and Sing" and the novel The Autobiography of an Ex-Colored Man.

James E. Ransome's numerous accolades include a Coretta Scott King Medal (which he won for The Creation), two Coretta Scott King Honors, one of which was awarded for Before She Was Harriet, and an NAACP Image Award. He lives in upstate New York with his wife and collaborator, writer Lesa Cline-Ransome.
Loading...
or
Not Currently Available for Direct Purchase