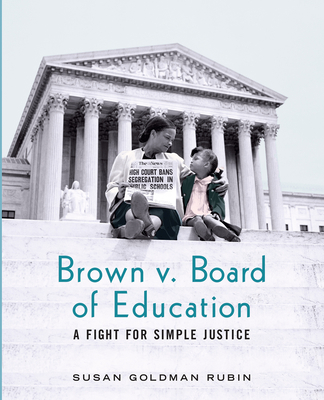 Brown v. Board of Education

A Fight for Simple Justice

An award-winning author chronicles the story behind the landmark Supreme Court decision in this fascinating account for young readers.

In 1954, one of the most significant Supreme Court decisions of the twentieth Century aimed to end school segregation in the United States. The ruling was the culmination of work by many people who stood up to racial inequality, some risking significant danger and hardship, and of careful strategizing by the National Association for the Advancement of Colored People (NAACP).

Award-winning author Susan Goldman Rubin tells the stories behind the ruling and the people responsible for it. Illustrated with historical photographs, this well-researched narrative account is a perfect introduction to the history of school segregation in the United States and the long struggle to end it. An epilogue looks at the far-reaching effects of this landmark decision, and shows how our country still grapples today with a public school system not yet fully desegregated.

Praise For Brown v. Board of Education: A Fight for Simple Justice…

* "This behind-the-scenes story of the people and events leading to the landmark Brown v. Board of Education's Supreme Court decision shows that even if the justice sought may be simple, getting it is long and complicated....A rich, compelling story of the many people who stood up to racial inequality, risking significant danger and hardship for the cause of justice. (photos, timeline, bibliography, source notes, index) —Kirkus Reviews, Starred Review

* "In a highly readable narrative, this title tells the story of the monumental 1954 Supreme Court decision that mandated desegregation in public schools in the United States.....The book demystifies this legal journey and puts a face to it by profiling the young student plaintiffs, their brave and determined parents, and, in particular, Thurgood Marshall, the lead lawyer for the NAACP and the driving force behind the legal struggle for desegregation. These personal stories, as well as other interesting details and descriptions, make for an approachable and easily digestible account that succeeds in bringing history to life.... VERDICT An engaging and thorough take on an important topic, this is a first purchase for middle school U.S. history collections." —School Library Journal, Starred Review

SUSAN GOLDMAN RUBIN is the prominent author of more than thirty-five books for children. Her Freedom Summer: The 1964 Struggle for Civil Rights in Mississippi was an ALA Notable Book, a Booklist Editor's Choice and a Golden Kite Honor Award recipient.
Loading...
or
Not Currently Available for Direct Purchase