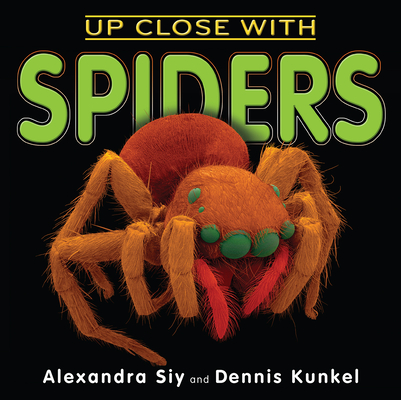 Up Close With Spiders

Debunking myths about spiders, this book takes an extremely close look at creatures that both fascinate and terrify humans.

An introduction explains what makes spiders unique. Then ten species are highlighted with incredible electron micrograph photographs and surprising facts. From diving bell spiders that live in bubbles underwater, to spitting spiders that shoot venomous wads of spit at their prey, to black widows and wolf spiders, this unusual book will intrigue readers and help dispel arachnophobia. First published in 2015 as Spidermania, this title has been repackaged as a companion to Up Close with Bugs (Bug Shots).

Praise For Up Close With Spiders…

Praise for the hardcover edition, Spidermania: Friends on the Web

"An unusual approach to the creepiest of crawlies, likely to snare unwary passers-by in droves."—Kirkus Reviews

"Siy conveys scientific concepts and terminology very well, and her text is nicely complemented by Kunkel's detailed, vivid photographs and digitally enhanced electron micrographs . . . readers will come away with a fairly comprehensive understanding of spiders and spider diversity."—Booklist

"Vibrant coloring makes it easy to identify the spiders' anatomical features . . . readers should be impressed by the arachnids' versatility and capability"—Publishers Weekly

DENNIS KUNKEL, PhD, is a scientist and microscopist. His award-winning microphotographs have appeared in dozens of publications, including Time, the New York Times, Scientific American, and National Geographic. His work has appeared in many children's books.
Loading...
or
Not Currently Available for Direct Purchase